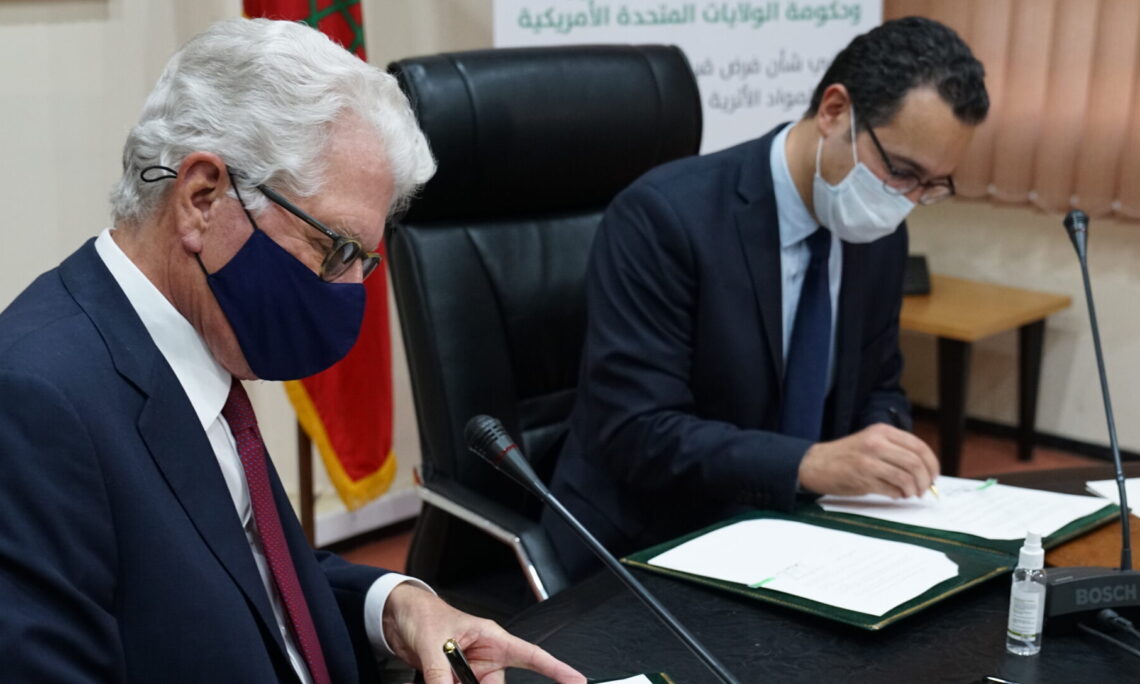 Jan. 14 – The Moroccan and U.S. governments today signed a memorandum of understanding (MOU) aimed at protecting Morocco’s cultural heritage from smuggling and strengthening the strategic partnership between our two countries.

U.S. Ambassador to Morocco David T. Fischer and Moroccan Minister of Culture Othmane El Fardaous signed the MOU, which will restrict the import to the United States of certain archaeological and ethnographic material from Morocco. U.S. Assistant Secretary of State for Educational and Cultural Affairs Marie Royce participated in the event virtually from Washington, DC.

“The United States has deep respect for Morocco’s cultural heritage,” Assistant Secretary Royce said. “This agreement is yet another example of the long history of collaboration between the United Sates and Morocco.”

“I want to thank His Majesty King Mohammed VI for his unwavering support for this type of critical work – preserving the Kingdom’s cultural riches for future generations and ensuring that the United States and Morocco can work together on such a noble endeavor,” Ambassador Fischer said. “This agreement allows our cultural institutions and law enforcement to work together to protect Morocco’s cultural patrimony from looters and traffickers, and it promotes expanded cultural exchange between our countries,” he added.

For his part, Minister Othman El Ferdaous declared that the signing of this memorandum followed more than a year of preparatory work done by cultural specialists from the U.S. State Department, the U.S. Embassy, and from the Moroccan Ministry of Foreign Affairs and the Ministry of Culture. He explained that this agreement is part of the efforts led by Morocco under the enlightened leadership of His Majesty King Mohammed VI to preserve the national cultural heritage, and reflects the eagerness to work in close collaboration through increased cooperation and coordination between the institutions and services concerned with the fight against the illicit trafficking of cultural goods in the two countries, through training workshops, conferences, meetings and to contribute to the exchange of expertise and experience to meet the challenges related in particular to the protection of various heritage objects from abusive and illegal importation. The Minister added that this cooperation constitutes a fundamental step in the fight against transnational organized crime.

This agreement also will increase collaboration among scientific, educational, and cultural institutions in our countries, increasing the public’s appreciation of Morocco’s rich cultural heritage.

The United States has a long track record of working closely with Morocco to preserve cultural heritage sites throughout the Kingdom. Since 2002, the U.S. Ambassadors Fund for Cultural Preservation has invested more than $860,000 in 11 projects to preserve Morocco’s cultural heritage. (See the attached fact sheet.)

USAID has obligated $3 million to fund programs in Morocco supporting the protection and support the cultural heritage of religious minorities.