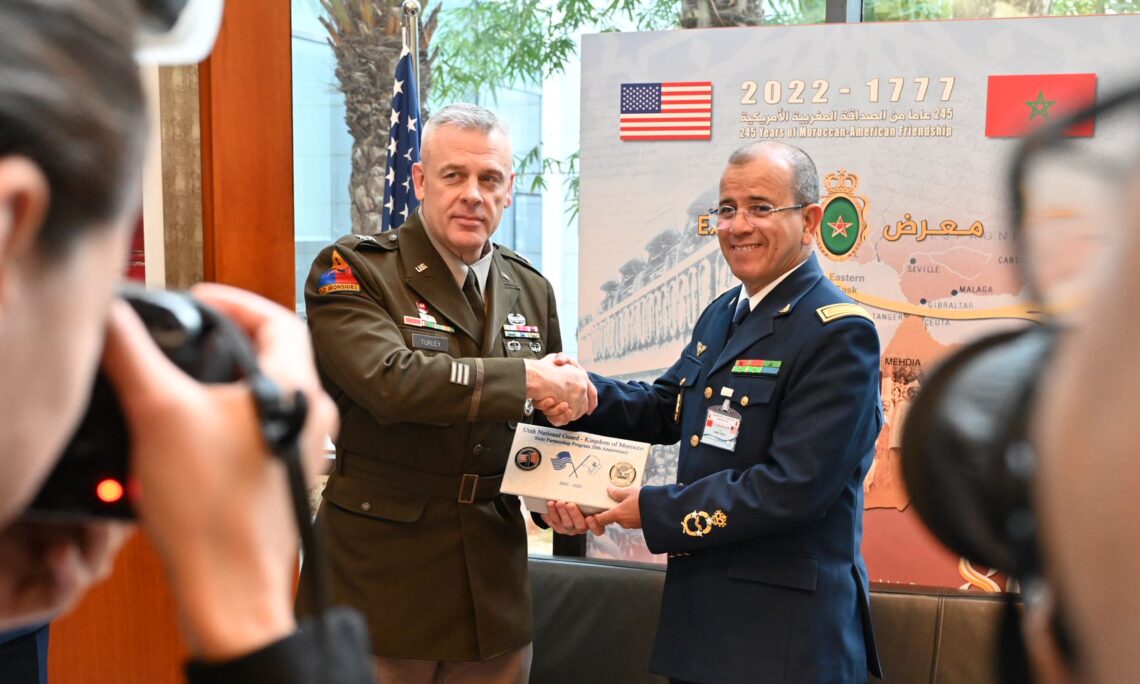 Maj. Gen. Michael J. Turley of the Utah National Guard today joined officials from the Royal Moroccan Armed Forces at the National Library of Morocco in Rabat for the official opening of a temporary exhibition about the 80th anniversary of Operation Torch.  The exhibition, a joint project of the FAR’s Military History Directorate and the Utah National Guard, is free and open to the public until Nov. 20.

“Today, the U.S.-Morocco commitment to supporting regional peace and security is stronger than ever.  We look back at the events of November 1942 with reverence, and we express our deep gratitude to the soldiers, sailors and airmen for the role they played in securing the foundation for that peace and security,” Maj. Gen. Turley said during the opening ceremony.  “This history is why we were eager to partner with the FAR to provide objects for this exhibition.  The Utah Military Museum has loaned more than 40 World War II-era items, including uniforms, mess kits, postcards, newspapers, photos.  These items, donated by the people of Utah to our museum, and now here in Morocco, each show a different slice of the U.S.-Morocco relationship.”

“It’s all part of a greater whole – a relationship that, undoubtedly, will continue to grow in strength and importance in the years ahead.”

During the month of November, the U.S. Mission to Morocco is commemorating the 80th anniversary of Operation Torch, the first major U.S. military operation of the European-North Africa theater during World War II and a milestone in the deep, historic ties between the United States and Morocco.  In partnership with the Military History Directorate of the Moroccan Armed Forces (FAR), the National Library of Morocco, the Tangier American Legation Museum, and the Utah National Guard, the U.S. Mission is organizing two exhibitions and a series of lectures and media engagements to highlight the significance of this anniversary.

On Nov. 8, 1942, more than 30,000 U.S. troops from the Western Naval Task Force landed in Safi, Mohammedia, and near Kenitra as part of Operation Torch, which was, at that time, the largest amphibious military landing in history.  Although U.S.-Morocco diplomatic ties date back to the founding of the United States, prior to November 1942, there rarely had been more than a hundred U.S. citizens in Morocco at any one time.  By the end of 1942, however, there were more than 100,000 U.S. military personnel in Morocco, which became a critical base of operations for Allied forces as they pushed against the Nazi war machine from North Africa.  In January 1943, U.S. President Franklin Roosevelt and British Prime Minister Winston Churchill met in Casablanca to discuss plans for executing the rest of the war against Germany and the Axis powers.  During this same conference, President Roosevelt and Prime Minister Churchill met with then-Sultan Mohammed V.

U.S.-Morocco friendship today – stronger than ever

These seminal events are the foundation of the vital U.S.-Morocco security partnership that exists today.  Morocco was home to a U.S. naval air station in Kenitra during the height of the Cold War.  Over the past two decades, Morocco has hosted African Lion, the largest military exercise in Africa and a symbol of the Kingdom’s role in support of regional stability.  In 2023, the Mission will celebrate the 20th anniversary of formal ties between the FAR and the Utah National Guard under the U.S. Department of Defense’s State Partnership Program, which has encouraged even greater security cooperation between the United States and Morocco.

Paying tribute to the fallen

In recognition of Nov. 8’s historical significance, several dozen U.S. military and diplomatic personnel, including U.S. Consul General Lawrence Randolph and Brigadier General Jon Solem of U.S. Africa Command, gathered today at the Western Naval Task Force Marker in the Ben M’Sik military cemetery in Casablanca to pay their respects to those who fought and died during Operation Torch.  The ceremony included U.S. Marines raising the U.S. flag over the marker, which is maintained by the American Battle Monuments Commission.  Representatives from the FAR and other diplomatic missions also were in attendance.

A permanent exhibition in Tangier

This evening, the Tangier American Legation Museum is officially opening a permanent exhibition on Operation Torch in a room that, during World War II, housed a listening station for the Office of Strategic Services, the main U.S. intelligence agency at the time.  The new exhibition, “The Legation, Morocco, and World War II,” explores how the war transformed U.S.-Morocco relations and the role played by the Legation – the oldest U.S. diplomatic mission anywhere in the world.  This evening’s exhibition opening will feature remarks from Meredith Hindley, a U.S. historian and expert on Operation Torch.  Polish Ambassador Krzysztof Karwowski will also discuss the Legation’s ties to a North African spy network led by Polish Army Major Mieczysław Słowikowski, who went by the codename “Rygor” and who fled Poland after it fell to the Nazis.

Operation Torch at the National Library

Starting on Nov. 14, the National Library of Morocco in Rabat is hosting a week-long exhibition about Operation Torch.  The exhibition, a joint project of the FAR’s Military History Directorate and the Utah National Guard, places Torch in the broader context of U.S.-Morocco shared history.  A featured item is a table used by Maj. Gen. George S. Patton, Jr., commander of the U.S. troops who landed in Morocco in November 1942.  The exhibition also features a uniform resembling the one worn by Gen. Patton, as well as dozens of World War II-era items loaned by the Utah Military Museum.  The general public can visit the exhibition, free of charge, until Nov. 20.

November’s commemorations also include a series of public lectures by Meredith Hindley, author of “Destination Casablanca: Exile, Espionage, and the Battle for North Africa in World War II.”  Last week, she spoke at the Dar America cultural center in Casablanca and met with members of the Casa Memoire historic preservation organization.  On Saturday, she gave a lecture to students at the School of Humanities of Abdelmalek Essaadi University in Tetouan.  Later this week, she will speak at the Schools of Humanities-Sais at the University Sidi Mohammed Benabdellah in Fez and the American Space in Oujda.

*Please find below a Box link to more photos of the Operation Torch exhibition opening at the National Library: