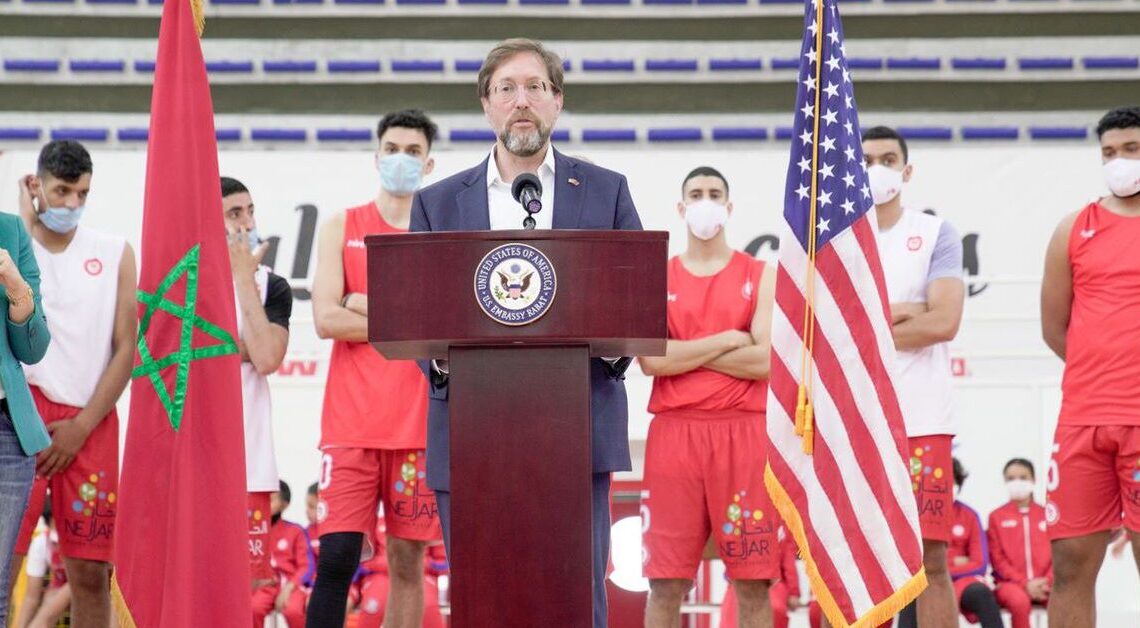 April 2, 2021 – The U.S. Embassy in Morocco today joined with the Association Sportive de Sale to announce the club’s participation in the NBA’s Basketball Africa League (BAL), a partnership between the NBA and the International Basketball Federation – and the NBA’s first formal collaboration in creating a basketball league outside of North America.

AS Sale, founded in 1928 and a seven-time national champion, will serve as Morocco’s national team in the new league. It will be among club teams from 12 African countries that will compete in a “bubble” environment in Rwanda to mitigate the risk from COVID-19. The inaugural season will start on May 16, with teams advancing progressively toward the playoffs, which will be held May 30.

“The U.S. Embassy will join Morocco in cheering for its team in the Basketball Africa League tournament this May,” U.S. Embassy Charge d’Affaires David Greene told the press at AS Sale stadium. “This League has been a long time coming, with delays and safety protocols necessitated by the pandemic. The fact that we are standing here today, with the tournament a mere six weeks away, attests to the patience, prudence, close cooperation, and resilience of both AS Sale and the NBA. We could not be more excited!”

Present at the ceremony to meet local players was former NBA player Sam Vincent, who also serves as the Chief of International Relations and Development for the Amateur Athletic Union (AAU), an American NGO that promotes the development of amateur sports and physical fitness programs. Vincent played for the Boston Celtics and Chicago Bulls, among other teams, during his NBA career.

Today’s announcement was in keeping with the Embassy’s work with the Moroccan Ministry of Education and with Moroccan NGOs, like TIBU, on programs that use sports – including basketball – to foster confidence and leadership skills among young Moroccans. This includes over $250,000 in support for TIBU’s basketball centers that positively engage vulnerable youth in the north and in Laayoune, as well as $50,000 in support for an “African Education through Sports Summit,” which is taking place in Morocco this week.

The arrival of the Basketball Africa League also comes as the United States and Morocco are celebrating “200 years of friendship,” marking the bicentennial of the American Legation in Tangier, our oldest diplomatic property, and a year-long celebration of the cultural, economic and security partnership between our two countries.