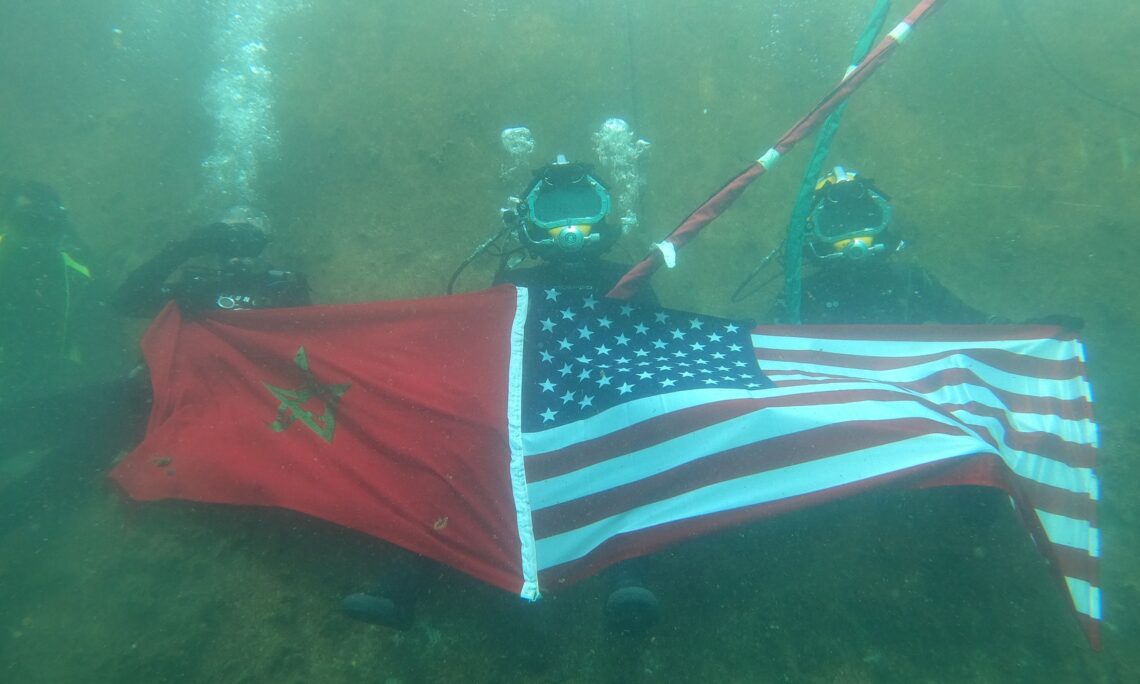 “We are excited to work with the U.S. Navy divers again,” said LT Toaufik Essaadi, Royal Moroccan Navy. “Our goal is to increase our diving capability in all aspects of military diving.”

The engagement focused on advanced diving capabilities such as surface supplied diving, underwater cutting and welding and dive casualty management. These capabilities are important to both the U.S. Navy and Royal Moroccan Navy because of the extremely large amount of ship traffic in this part of the Mediterranean. The skills rehearsed during this event, including marine rescue or salvage, enhance the partners’ abilities to respond to an incident if called upon.

“The Moroccan Navy divers are a highly trained team of professional divers,” said U.S. Navy Construction Mechanic Senior Chief Nathan Emmett, from Underwater Construction Team (UCT) 1, and the Construction Detachment Charlie Master Diver and Officer in Charge. “Having strong relationships with partners like this right in our backyard means we are much more prepared to respond to a crisis.”

The dive engagement builds on a multi-year effort between CTF 68 and Moroccan partners. Seabees assigned to CTF 68 have been constructing training facilities at the Royal Moroccan Navy dive school for the two last years. These construction efforts have included maritime training facility with a rappelling tower, a close-quarter shoot house, and a shipping container mockup.

The work accomplished building these facilities and diving alongside one another greatly enhances the combined capacity and capability of the Royal Moroccan Navy and U.S. Navy. It also paves the way for continued training opportunities during annual exercises Phoenix Express and African Lion. The U.S. and Morocco are planning for future maritime interdiction training and a multinational dive exchange.

“The Royal Moroccan Navy were fantastic and gracious hosts and their dive school is very impressive,” said U.S. Navy Utilitiesman 2nd Class Robert Urlich. “It was an honor and a real pleasure to work side by side with such professionals!”

UCT 1 is a specially trained and equipped unit within the Navy Expeditionary Combat Force that construct, inspect, repair and maintain ports, ocean facilities, underwater systems and general maritime infrastructure. UCT is a key component of port damage repair operations during a disaster or contingency.

For over 80 years, NAVEUR-NAVAF has forged strategic relationships with allies and partners, leveraging a foundation of shared values to preserve security and stability.

Headquartered in Naples, Italy, NAVEUR-NAVAF operates U.S. naval forces in the USEUCOM and USAFRICOM areas of responsibility. U.S. Sixth Fleet is permanently assigned to NAVEUR-NAVAF, and employs maritime forces through the full spectrum of joint and naval operations.