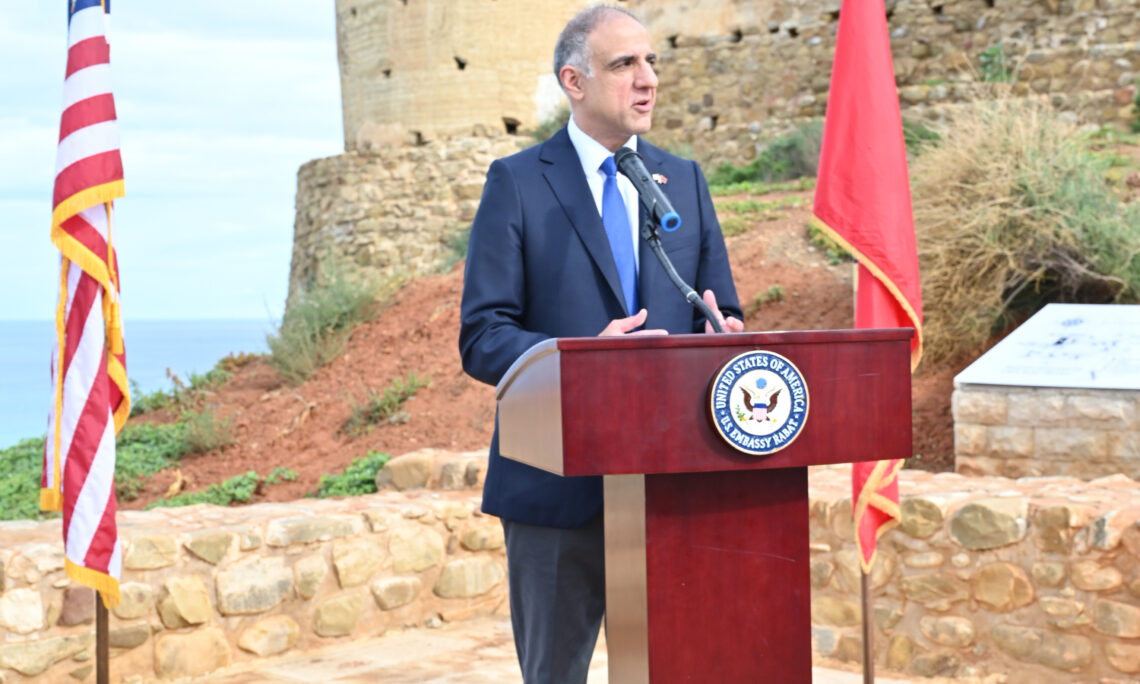 Al Hociema – U.S. Ambassador Puneet Talwar visited Al Hoceima for the first time on Friday, December 16, 2022 to preside over the closing ceremony of two U.S. Mission projects in the region– the Ambassador’s Fund for Cultural Preservation renovation of the Torres Alkalaa fortress at Al Hoceima National Park and the 2022 Academy of Women Entrepreneurs (AWE).

The Ambassador’s Fund for Cultural Preservation awarded a $170,000 grant to Moroccan NGO GEODE to complete the 3rd phase of the renovation project of the Torres Alkala site, a 13th century fortress in Al Hoceima National Park.  The renovation aimed at making the site safer, more accessible, and more attractive for visitors. The works included finishing the outside walls and adding safety and directional features.  The initial two phases were funded by the Ministry of Culture and the European Union.

During the ceremony, Ambassador Talwar thanked the Ministry of Culture and the Moroccan Government for their support and said that “The American government and American people invest in Morocco because our relationship with the country is so important and long standing. This magnificent fortress, which our governments restored together, is now part of that history.”

The ceremony was attended by U.S. Ambassador to Morocco Puneet Talwar, the Director of Heritage from the Ministry of Culture, Youssef Khiara, the Regional Delegate for Cultural Heritage, Hamza Ouassini, as well as GEODE’s President Anouar Akkouh, an International Visitors Leadership Program alumnus and MEPI grantee.

The Ambassador’s Fund for Cultural Preservation has financed 12 cultural heritage projects in Morocco totaling more than $1 million over the past 18 years.

In the afternoon, Ambassador Talwar presided over the closing ceremony of the Academy of Women Entrepreneurs (AWE) at the Mirador Cultural Complex, which was attended by Governor Farid Chourak.

In 2022, AWE provided approximately 70 women from Larache, Chefchaouen, and Al Hociema with the knowledge, networks, and access they need to launch or scale their business. Going on its 3rd edition in Morocco, AWE has trained over 180 Moroccan women entrepreneurs since 2019.

During the ceremony, the Ambassador stressed that “by promoting women’s economic opportunities and ensuring women have the skills, capabilities and resources needed to participate and excel in the economy, the AWE program invests in Morocco’s economic growth and contributes to diversity and inclusion.”

The U.S. State Department’s Bureau of Educational and Cultural Affairs (ECA) established the Academy for Women Entrepreneurs (AWE) in 2019 and has since implemented the program in more than 80 countries, helping more than 16,000 women entrepreneurs around the world grow their businesses.

This visit to Al Hociema marked the Ambassador’s first trip to the north since his arrival to Morocco.

For questions and requests, please send your e-mail to RABAT_Press@state.gov