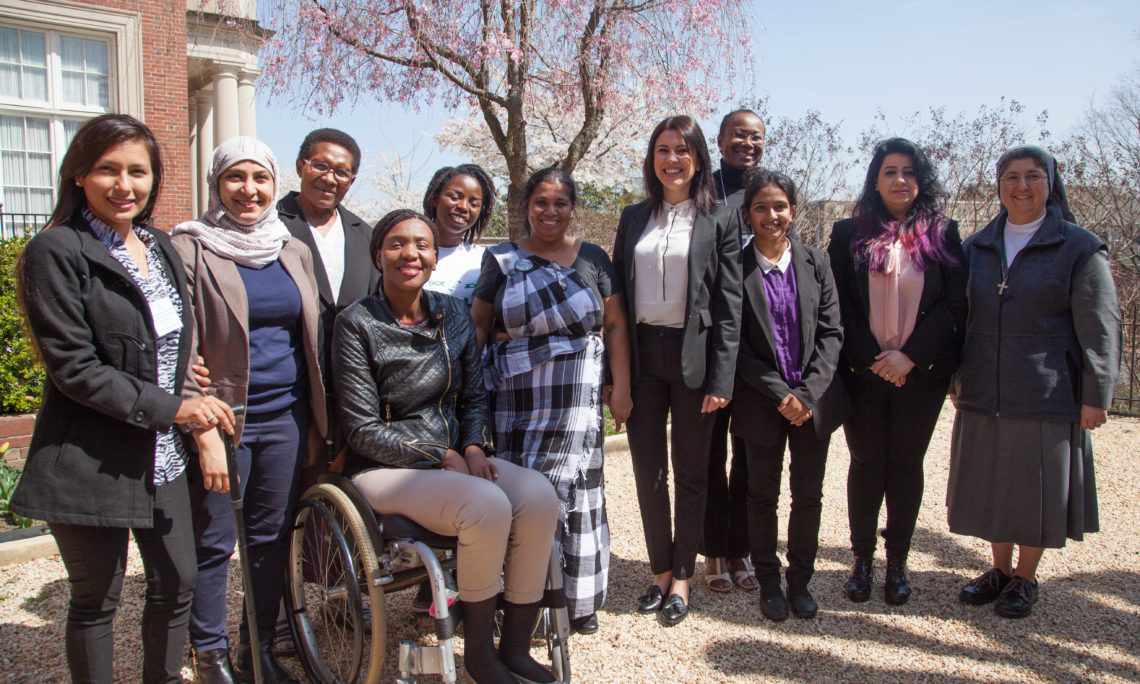 By Thomas A. Shannon, Under Secretary of State for Political Affairs on March 29, 2017

First Lady Melania Trump, today, honored 13 extraordinary women with the Secretary of State’s International Women of Courage Award. This award recognizes women around the globe who have shown exceptional courage and leadership in advocating for women’s rights, empowerment, and justice, often at great personal risk.

The women we’ve honored this year illustrate how courage takes all forms, and here are a few of their stories:

Natalia Ponce, a Colombian survivor of a chemical acid attack that burned her face and body, underwent some 50 surgeries to get her life back.  Natalia termed her recover from the burns of a liter of sulfuric acid on her face and body as a “rebirth.”   Natalia started her own foundation and advocacy campaign that ultimately led the Colombian Congress to pass the “Natalia Ponce de Leon Law” in January 2016.

When Sandhya Ekneligod’s husband, a well-known political cartoonist and journalist disappeared in January 2010, she resolved to seek the truth about his fate. She appeared in court more than 80 times in the face of obstructionist judges and authorities. A member of the majority Sinhalese community in Sri Lanka, Sandhya has become a symbol for the many thousands of persons—including from the Tamil minority—who have suffered the loss of disappeared relatives over the course of the 27-year civil war and earlier insurrections.

Fadia Najib Thabet, a child protection officer and reporter on human rights violations in southern Yemen, risked her life to protect the region’s children from Al Qaeda and Houthi militias. Her acts of courage dissuaded young boys from joining terror groups and militias.  In the process she exposed Al Qaeda’s Yemeni branch “Ansar al Sharia” as a recruiter of child soldiers as well as documented human rights violations by other armed groups for the United Nations.

Veronica Simogun, founder of the Family for Change Association and advocate for women and girls in Papua New Guinea, has lived and worked in a country where two-thirds of women and girls have been victimized due to their gender. Despite facing death threats for her work with survivors, Veronica has devoted herself to helping others and to building relationships with local law enforcement and men and boys to overturn the cultural norms that deprive women and girls of their status and basic rights.
Sister Carolin Tahhan Fachakh, a Roman Catholic nun living in Aleppo, has worked tirelessly to support the needs of Syria’s most vulnerable populations, particularly internally displaced persons and children.  During a period of intense bombing around a neighborhood school, Sister Carolin selflessly ensured that the children were brought safely home to their parents.  She has been a beacon of hope to both Muslims and Christians alike, while putting her own life at risk.

These women, just a handful of the remarkable stories of courage and resilience we heard today, serve as an inspiring reminder of how individuals can make a difference.  Each of these courageous women are dedicated to issues high on the list of global challenges we currently face.  Together, they provide a hopeful message that in the face of even some of the most daunting challenges, courage and leadership can pave the way to greater peace and progress.