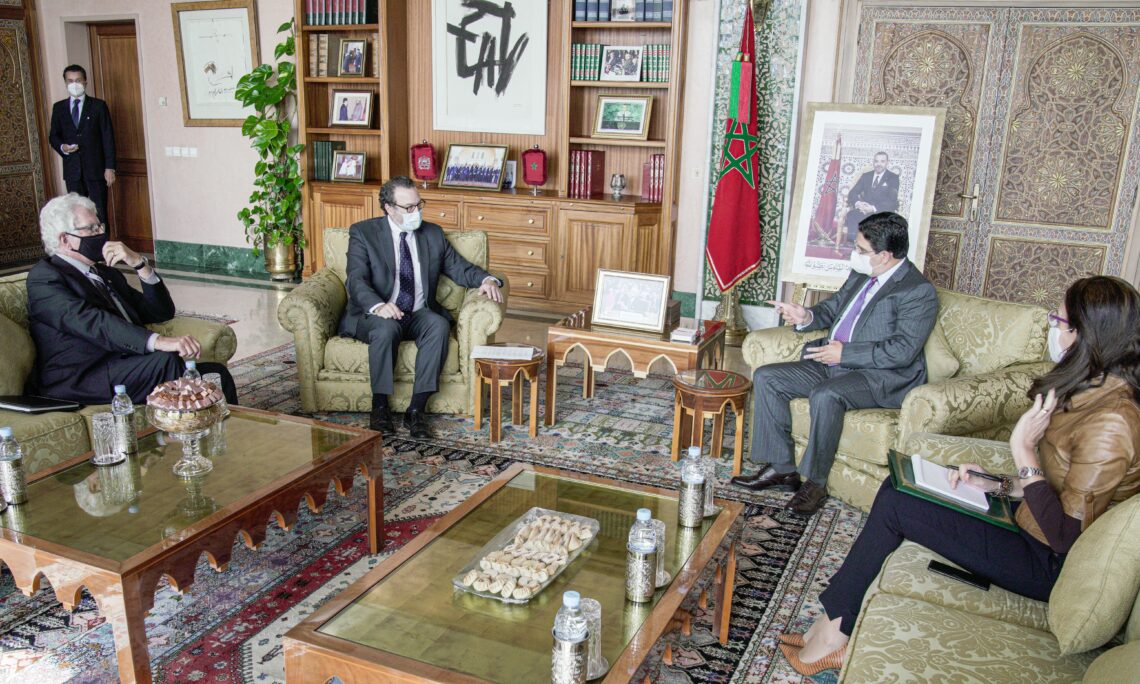 Press Statement from Assistant Secretary of State for Near Eastern Affairs David Schenker after his meeting in Rabat with Foreign Minister Nasser Bourita on Monday, October 19, 2020.

It was a pleasure to meet today with Foreign Minister Bourita.

We had a chance to talk about how, under the leadership of King Mohammed VI, we can make the already strong U.S.-Morocco strategic partnership even stronger. We appreciate the King’s continuous and valuable support on issues of common interest such as peace in the Middle East, and stability, security, and development across the region and the African continent.

We are working together to defeat the Covid-19 pandemic.  The United States government has partnered with the Kingdom of Morocco to invest millions of dollars in Morocco’s Covid-19 response.  This assistance has helped prepare laboratory systems, improve Covid-19 case detection and surveillance, and support technical experts, among other areas.

Morocco is the only country in Africa with which we have a Free Trade Agreement, and we and our companies see it as a gateway to the continent.  Over 150 American companies operate here, creating jobs for the local economy.  Next year will mark the 15th anniversary of the FTA taking effect and increasing the value of our trade by many multiples.

Morocco is also a close partner with the United States on a range of security issues.  It participates in more than 100 military engagements with us yearly, including African Lion. Secretary of Defense Esper was just here and signed a ten year Roadmap for Defense cooperation, a symbol of our long term and strategic cooperation.

We appreciate Morocco’s continuous support the UN’s efforts in Libya.  In the coming weeks, we look forward to a positive outcome from the UN-led intra-Libyan dialogue, which aims to create a new transitional government and chart the path to national elections. We strongly support the UN-facilitated Libyan Political Dialogue Forum (LDPF) as the means towards an inclusive, negotiated political solution to the conflict in Libya.

Before arriving in Morocco over the weekend, I was in Beirut, where Morocco demonstrated its generosity by setting up a field hospital that has helped over 50,000 Lebanese in the aftermath of the devastating explosions that took place there in August.

Next year, we will celebrate 200 years of friendship between Morocco and the United States, when we mark the bicentennial of the American Legation in Tangier, the oldest U.S. diplomatic property in the world.

As a sign of our long-term commitment to Morocco, we are about to start construction of one of our newest diplomatic properties, a $312 million Consulate General facility in Casablanca.

It’s another achievement in our long history of friendship, which, God willing, will continue long into the future.