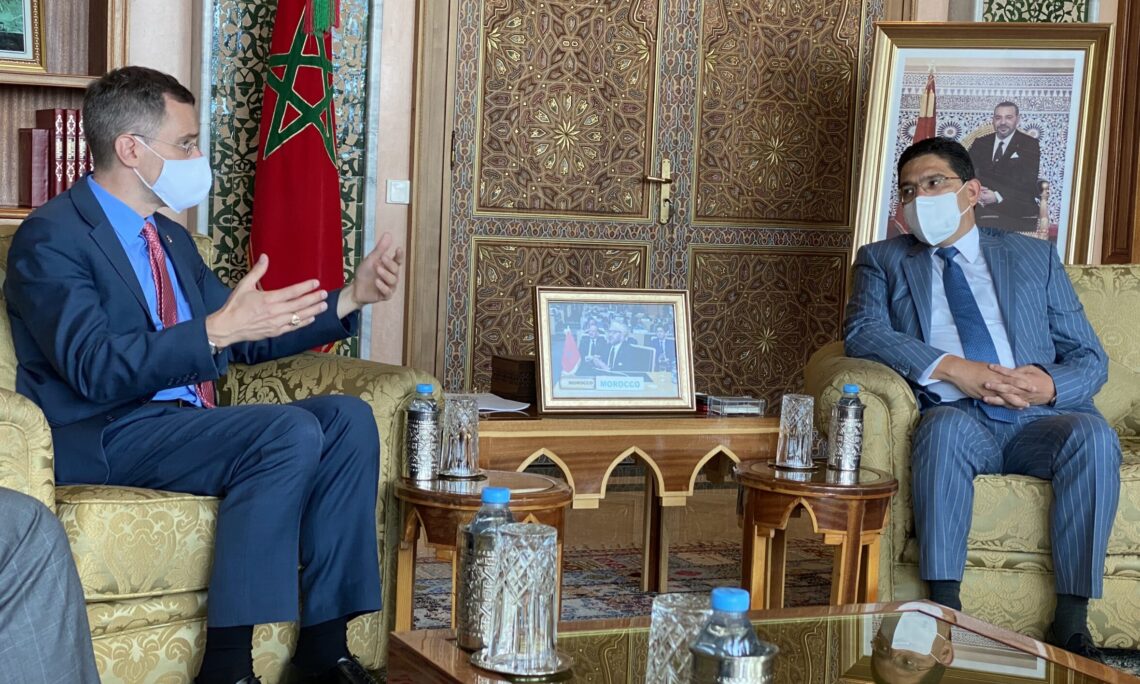 It was a pleasure to meet today with Foreign Minister Bourita.

We had a chance to talk about how, under the leadership of King Mohammed VI, we are making the already strong U.S.-Morocco strategic partnership even stronger, as we commemorate the bicentennial of the first U.S. diplomatic mission in Morocco – the Tangier American Legation – and celebrate over 200 years of friendship between our two countries.

Of course, our bilateral relations are even older than that – dating back to U.S. independence, when Morocco was the first country to recognize the fledgling United States.

We appreciate Morocco’s continuous and valuable support on issues of common interest such as peace in the Middle East, and stability, security, and development across the region and the African continent.

We are working together to defeat the COVID-19 pandemic.  Just this past weekend, the United States provided more than 300,000 Johnson & Johnson vaccines to Morocco.  These one-shot vaccines will boost the Kingdom’s already hugely successful vaccination campaign.

The United States has invested more than $15 million in Morocco’s COVID-19 pandemic response, working with the Ministry of Health and other partners to raise awareness about COVID-19 risks, train healthcare workers, study vaccine effectiveness, and provide hygiene and laboratory equipment and supplies.

This past weekend, we were also excited to see the inaugural commercial flight from Tel Aviv to Marrakech.  The United States welcomes Morocco’s steps to improve relations with Israel.  The Morocco-Israel relationship will have long-term benefits for both countries.

We appreciate Morocco’s continuous support for the UN’s efforts in Libya, and its support for removing foreign forces from Libya and for preparation for successful nationwide elections there — an essential step towards a stable, unified, and democratic Libya

On Western Sahara, we support a credible UN-led political process to stabilize the situation and secure a cessation of any hostilities.  We are consulting with the parties about how best to bring a halt to the violence and ultimately achieve a lasting settlement.

We strongly support UN efforts to appoint a Personal Envoy of the Secretary-General for Western Sahara as quickly as possible.  We are prepared to be actively engaged with all sides in support of that individual.

Morocco is also a close partner with the United States on a range of security issues.  It participates in more than 100 military engagements with us yearly, including African Lion – the largest annual U.S. military exercise on the continent, which returned to Morocco last month after a one-year hiatus because of the COVID-19 pandemic.

Last year, we signed a ten-year Roadmap for Defense cooperation, a symbol of our long-term and strategic cooperation.

Morocco is the only country in Africa with which we have a Free Trade Agreement, and we and our companies see Morocco as a gateway to the continent.  This year marks the 15th anniversary of the FTA taking effect.  Both countries have benefited greatly, through the creation of thousands of jobs and a five-fold increase in the volume of trade – to $5 billion annually.  Over 150 American companies operate here.

During my visit, I am excited to have a chance to go to the National Library to see our exhibition about the Legation bicentennial and the deep, historical ties between our two countries.

This exhibition is free and open to the public and will be on display at the National Library until October, when it will move to the Slaoui Foundation in Casablanca.  Please visit!