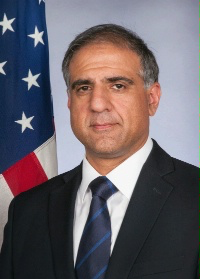 Ambassador Puneet Talwar was sworn in as the U.S. Ambassador to the Kingdom of Morocco on Nov. 4, 2022. Ambassador Talwar has held senior foreign policy and national security positions in the State Department, White House, and United States Senate. He most recently served as a Senior Advisor at the State Department. Previously, he served as Assistant Secretary of State for Political-Military Affairs, Special Assistant to the President and Senior Director at the National Security Council, and Senior Professional Staff Member at the Committee on Foreign Relations in the United States Senate.

Ambassador Talwar’s public service also includes key roles in the U.S. House of Representatives and the State Department’s Policy Planning Staff. In the non-governmental sector, he has been a Senior Fellow at the Asia Society Policy Institute, a Visiting Scholar at the University of Pennsylvania Penn Biden Center, a Counselor to the conflict resolution NGO Inter Mediate, and a Non-resident Scholar at Georgetown University’s Center for Security Studies. He has published articles in Foreign Affairs, Foreign Policy, and The National Interest.

Ambassador Talwar is a member of the Council on Foreign Relations and a native of Washington, DC. He earned his B.S. Degree in Engineering from Cornell University and his M.A. in International Affairs from Columbia University.