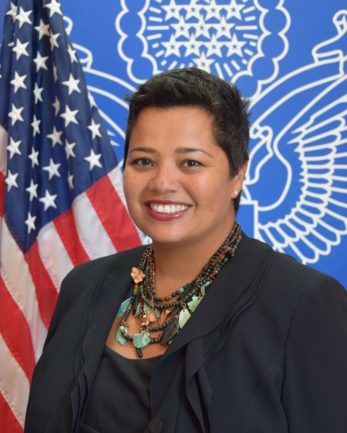 A United States diplomat since 1999, she has served in political, consular, economic, and public diplomacy postings in France, the United Arab Emirates, Jordan, Tunisia, Syria, and Togo. While posted in Washington, DC, she served in the cabinets of Secretaries Powell and Rice, and also as an examiner for the Foreign Service Exam (the concours diplomatique).  From 2010 – 2012 she was the State Department’s Arabic Language Spokesperson, leading engagement with Arab-speaking publics from Oman to Morocco.  In 2012, she was a Diplomat-in-Residence and professor at SciencesPo Paris.

Ms. Rasamimanana speaks French and Arabic and is a proud native of California.  She lives in Casablanca with her two sons.