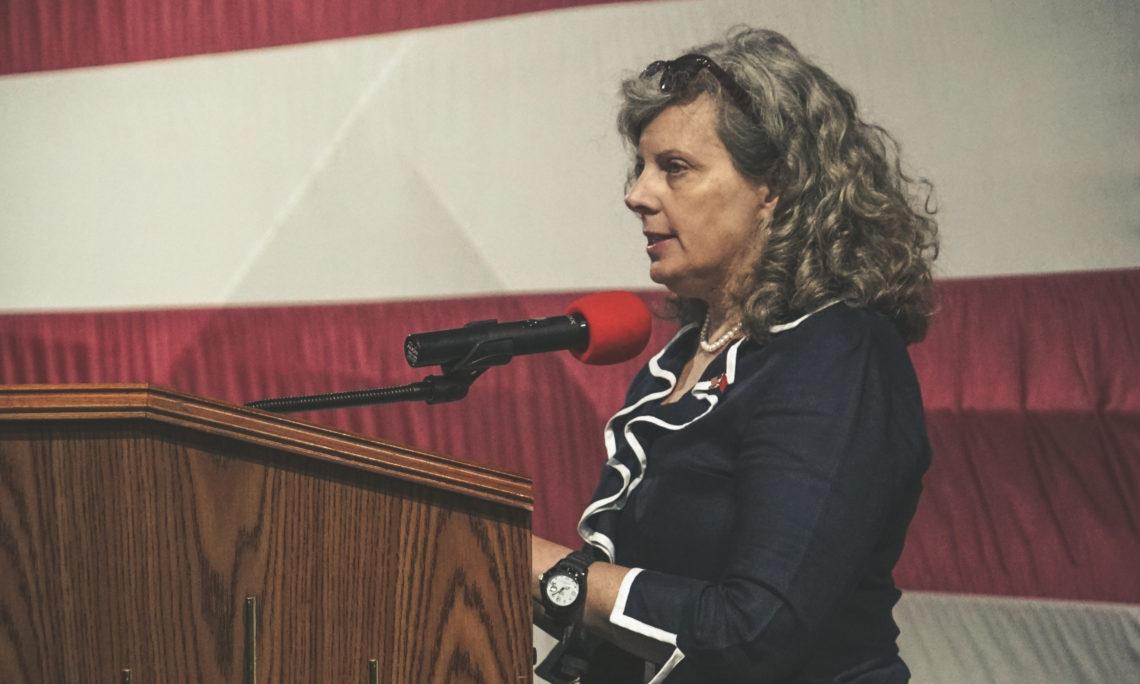 Dear Ministers, Esteemed Royal Counselors, Ministers-delegate and Secretaries General, Members of Parliament, Ambassadors and friends from the diplomatic corps, military officials, distinguished guests, colleagues, and my fellow Americans:  It is an honor to have you here, at the new Villa America.

Before I go further, I would like to thank the many people who have made this evening possible:

First, thank you to the American companies, which I like to call our ‘private sector ambassadors’, represented here this evening who have donated so generously to make this such a festive event.  The banner shows their names, names familiar to all of us.  They represent the commitment by U.S. firms to invest in Morocco, to provide employment, capital, and business expertise to grow the Moroccan economy and workforce, and we are very pleased that they could join us.

I would also like to recognize the fantastic trio of co-chairs who organized the incredible effort needed to bring us together this evening:  Allison Denakpo, Kim Boettcher, and Adnan Yacoubi.  They led a team of dozens of their colleagues all of whom devoted their time, energy, and creativity to making this a memorable occasion.

And to our talented co-workers who graced this evening with the moving renditions of the Moroccan and American national anthems:  I would like to let you know that our Moroccan colleagues who sang so beautifully are not professional singers but work with us daily as experts in the areas of development, human resources, budget, computers, and transportation, please join me in thanking Fatima Zahra Slimani, Amina OuldFatima, Brahim Zourraidi, Mustapha El Majdoubi, Soukaina Kodasse, and Imad Bakhti.

And whenever I am overseas, it is always a special moment for me to hear my national anthem, the Star Spangled Banner, being sung – thank you Lindsey Swoboda.

Once again, Welcome! We are delighted to have you with us this evening to celebrate two important anniversaries in the year 2017:  241 years of American independence and 240 years of Moroccan-American friendship.

In 1776, our forefathers (and foremothers – please remember we women were there from the beginning and will continue to be there for each and every new step along the way!) embarked on an experiment in democracy, a bold step into an unknown future when they put forth our Declaration of Independence, which affirmed our nation’s belief in and hope for a better world, in words that still echo today:

We hold these truths to be self-evident, that all men are created equal, that they are endowed by their Creator with certain unalienable Rights, that among these are Life, Liberty, and the pursuit of Happiness.

The final line of this essential expression of our experiment in democracy, underscores the uncertainty and risk they faced, when they concluded:

And for the support of this Declaration, with a firm reliance on the protection of Divine Providence, we mutually pledge to each other our Lives, our Fortunes, and our sacred Honor.

Looking back from this time and distance, it seems as if that document was prescient, and easily predicted the wonderful future of my country.  But in fact at that moment, America’s struggle for independence was just beginning and our success was still far from certain.

But also at that moment, across the ocean, our call for freedom found a sympathetic listener.  Believing in the importance of befriending other nations and ensuring prosperity for his people by expanding trade, Morocco’s Sultan Sidi Muhammad Ben Abdullah issued a declaration of his own on December 20, 1777 – which you saw tonight as the backdrop when you entered this residence.  He announced that American ships could pass freely into Moroccan ports, thereby granting our young democracy a most important political protection:  that of diplomatic recognition.  And so began this wonderful partnership between the United States and Morocco.

But while political affirmation of our new nation was important, more essential to our immediate survival was Morocco’s welcoming of our ships into its ports.  This opening of trade and commerce between the United States and Morocco supported us through the years of war, permitting us to withstand blockades and hardships, nurturing our young economy, and ensuring the first triumph of our democratic experiment.

What your Moroccan forefathers and foremothers did for us with those few words of encouragement in the winter of 1777 was enormous:  you recognized our dream for a better future, and you unlocked our potential to achieve it.  And for that we are grateful.

In the 240 years since Morocco helped launch our new democracy, our two nations have stood together on the world stage, partners striving for freedom and justice for all.  This year we honor the anniversaries of some of those monumental events:

Over these last 240 years since the Moroccan people first extended their hand in friendship, we have also celebrated milestones marking the very personal connection between Moroccans and Americans.

This year we celebrate 60 years of development cooperation between the U.S. Agency for International Development and the Government of Morocco.  During these 60 years, USAID has partnered with Morocco’s brightest minds on a diverse range of ambitious projects.  Early USAID investments helped build the Mohammed V and Mechra Hamadi dams and to improve maternal and child health care in Morocco. Today, our assistance cooperation focuses on providing positive opportunities for youth, from helping two young sisters from Tetouan pursue their dream of becoming auto mechanics to offering professional training to young men and women at universities and technical schools to sending twelve young girls to the NASA space camp in the state of Alabama.

We are also celebrating over fifty years of people-to-people exchanges through the Peace Corps, through our Fulbright Fellowships, and through our International Visitor Leadership Program that has sponsored hundreds of young Moroccan leaders in government, academia, civil society, and the arts in visiting the United States, all through the support of the American people.

And one of my favorite milestones, we are celebrating nearly five centuries – 490 years to be precise – of Moroccan connections to America.  It is believed that the first North African to arrive on the shores of what would become part of the United States – more than three hundred years later – was Estebanico Al Azemmouri, a Moroccan of Gnawa descent who participated in an expedition to colonize Florida in 1527.

As a country of immigrants – my own grandparents included – it is wonderful to know that the rich history of Morocco was woven into our tapestry of multiculturalism early on and continues to enrich us.

Today we continue to honor and celebrate our storied past and our hopeful future.

Morocco remains a vital security partner, as host to the largest annual joint military operation on the continent of Africa, African Lion, which this year had over one thousand U.S. military troops working side by side with their Moroccan comrades and those from nearly a dozen other countries on our mutual efforts to strengthen peace and security in the region and around the world.

Morocco continues to be an important economic partner including in multilateral fora, where Morocco has convened diverse actors to help find common purpose.  Morocco’s hosting of the meetings that led to the Marrakech Agreement in 1994 created the World Trade Organization to establish global rules between nations to ensure that trade flows smoothly, predictably, and freely – and with it the opportunities of economic growth and development.  Morocco and the United States just celebrated ten years of our Free Trade Agreement, the only one that the United States has in Africa.  And only last year Morocco hosted the world at COP22 in Marrakech, demonstrating leadership in protecting the environment for future generations.

And while our government-to-government connections are important, I believe it is the vitality of our people-to-people connections – ranging from sister-city friendships to student exchanges to civil society collaborations – that sustain our enduring partnership.

Today our close and abiding relationship continues on the basis of our shared interests and shared values.  We are partners striving for the advancement of regional cooperation and security, for continued economic growth and prosperity, for sustainable development of the countries across the continent, and for stronger connections between our institutions and our people.   We are proud to note that on all these fronts — and for many other common objectives — Morocco and the United States share a resolute commitment to work in partnership.

The intertwined history of Morocco and the United States has been commemorated in many ways. These interactions all contribute to the strong bond that our two countries enjoy today.

When I reflect on the friendship Morocco showed to the United States by opening its ports to our traders and diplomats 240 years ago, I can’t help but wonder about how different my own country’s history might have been without this gesture of support, and how different the world of today would be without Morocco’s ongoing efforts to strengthen internationalism to the benefit of all nations.

I would like to close by expressing gratitude to Morocco for its role in the history of my country and optimism in the promise we share for the next two centuries of friendship.  In 1777 Morocco sent a message of welcome to a new and unknown country and we responded to that message of welcome by affirming “our earnest desire to cultivate a sincere and firm peace and friendship with [his] Majesty and to make it lasting to all posterity.”

Thank you so much for joining us in this celebration of 241 years of American independence and 240 years of Moroccan-American friendship.