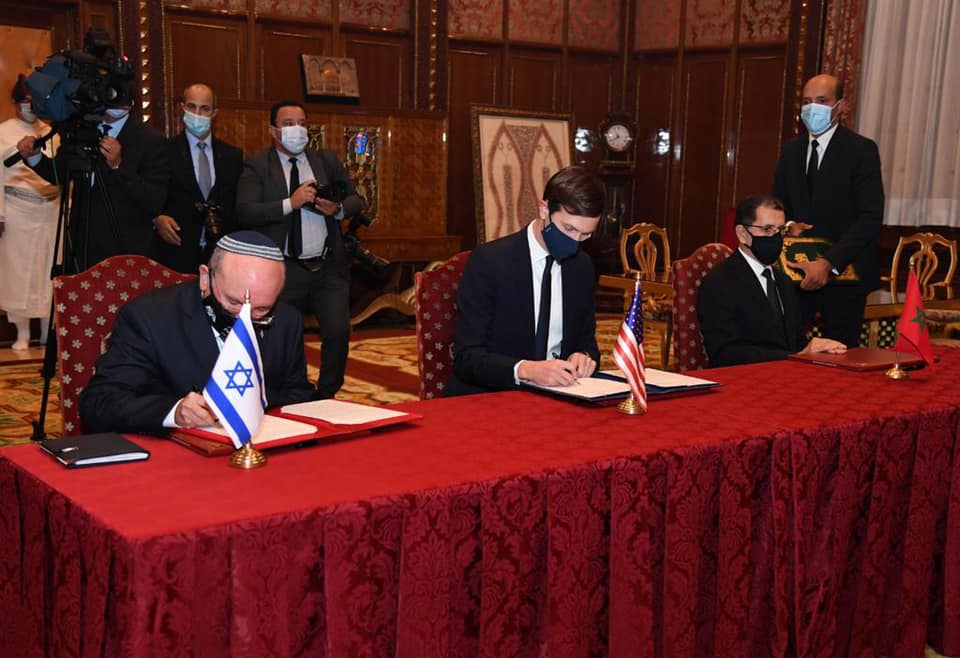 The Kingdom of Morocco, The United States of America and the State of Israel,

Referring to the telephone conversation held between His Majesty King Mohammed VI and His Excellency President Donald Trump, on 10 December 2020, and to the historic statements issued on the same day by them, and by His Excellency Prime Minister Benjamin Netanyahu of the State of Israel, announcing the opening of a new era in the relations between the Kingdom of Morocco and the State of Israel;

Welcoming the opportunity created through the extraordinary efforts and leadership of the United States;

Highlighting the proclamation by the United States of America on “Recognizing the Sovereignty of the Kingdom of Morocco over the Western Sahara”, according to which:

Recalling the exchanged views, during the same conversation between His Majesty King Mohammed VI and His Excellency Donald Trump, on the current situation in the Middle East region in which His Majesty the King reiterated the coherent, constant and unchanged position of the Kingdom of Morocco on the Palestinian question, as well as the position expressed on the importance of preserving the special status of the sacred city of Jerusalem for the three monotheistic religions in His Majesty the King’s capacity  as Chairman of the Al-Quds Committee;

Recognizing the historic role that Morocco has always played in bringing the people of the region closer together and promoting peace and stability in the Middle East, and given the special ties that His Majesty maintains with the Moroccan Jewish community living in Morocco and throughout the world including in Israel;

Mindful that the establishment of full diplomatic, peaceful and friendly relations is in the common interest of both countries and will advance the cause of peace in the region, improve regional security, and unlock new opportunities for the whole region;

Recalling the conversation between His Majesty King Mohammed VI and His Excellency Donald Trump, His Majesty the King affirmed that the Kingdom of Morocco and the State of Israel intend to:

Based on the above, the Kingdom of Morocco, the United States of America and the State of Israel agree to: