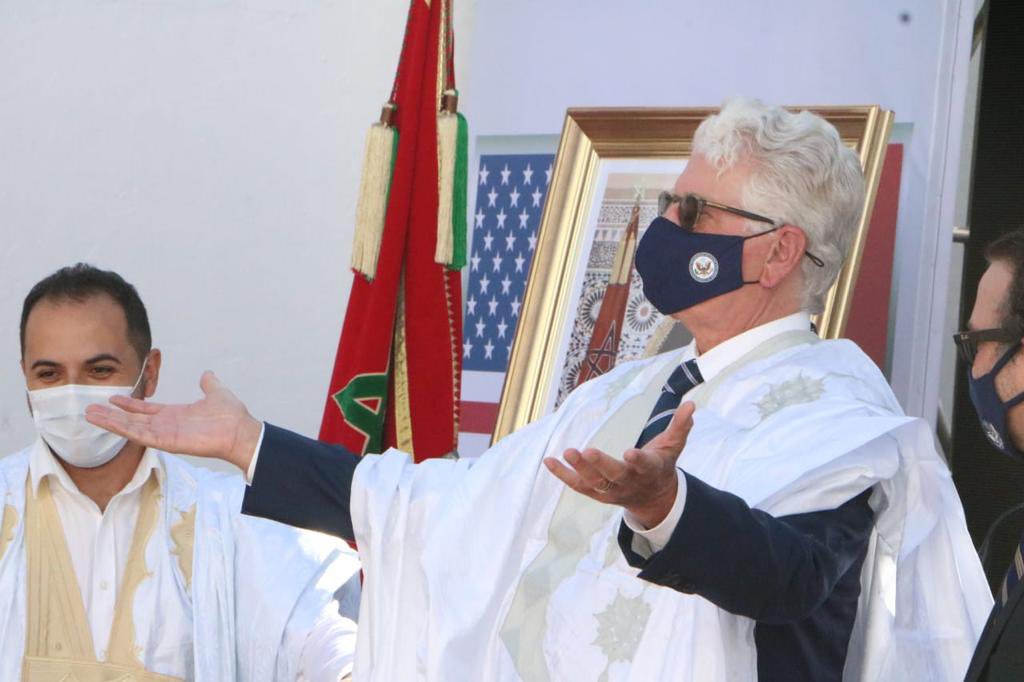 The Ambassador’s historic visit to Dakhla

U.S. Ambassador David T. Fischer traveled to Dakhla today to launch the official process for opening a U.S. consulate facility in Morocco’s Southern Provinces and to demonstrate the U.S. commitment to supporting the region’s economic development.  He became the first U.S. ambassador to visit the Moroccan Sahara.

“Our trip today to Dakhla is another historic milestone in more than 200 years of friendship between the Kingdom of Morocco and the United States of America,” Ambassador Fischer said.  “It is such an honor for me to visit this stunningly beautiful and critically important region of Morocco, and to begin the process of establishing a U.S. diplomatic presence here.”

“I give my sincere thanks to His Majesty King Mohammed VI, whose firm dedication to U.S.-Morocco friendship was essential for making today’s visit possible,” the Ambassador added.

Ambassador Fischer was joined by Assistant Secretary of State for Near Eastern Affairs David Schenker, for discussions with government and business leaders in Dakhla, including the Wali for Dakhla-Oued Ed-Dahab, Mr. Lamine Benomar and the President of the Regional Development Council.  Ambassador Fischer and Assistant Secretary Schenker were warmly welcomed by His Excellency Foreign Minister Nassir Bourita as they visited potential locations that could serve in the future as a physical U.S. consulate in Dakhla.  Ambassador Fischer also visited the local branch of Phosboucraa Foundation to learn more about their efforts to promote entrepreneurship, social development, and the value of civic engagement for the community in Dakhla.

During his meetings with local dignitaries, Ambassador Fischer also emphasized that the goal of the trip is to underscore the United States’ focus on fostering economic prosperity, peace, and stability in Morocco, and especially in the Southern Provinces.

CEO of the U.S. International Development Finance Corporation Adam Boehler sent a video message highlighting the historic visit to Dakhla, and reiterated the U.S. commitment to investment in building economic prosperity for all Moroccans, especially those in the Southern Provinces.  Mr. Boehler noted, “The friendship between the United States and Morocco is unbreakable, and is only growing stronger.”

President Donald Trump announced that the U.S. intends to open a consulate on Dec. 10, in his official proclamation recognizing Moroccan sovereignty over its southern region.  Two weeks later, on Dec. 24, U.S. Secretary of State Mike Pompeo announced the establishment of a “Virtual Presence Post,” an important first step in the process for creating a new U.S. diplomatic mission.

A Virtual Presence Post, or VPP, provides important information about consular services, opportunities for cultural exchange, and U.S. government announcements about new programs that promote economic and business investments in the region.  It also allows for the U.S. government to take the time needed to address the necessary regulatory and security requirements for opening a consulate.

“I know this will be the first of many official U.S. government visits to Morocco’s Southern Provinces, as we initiate the process of identifying an appropriate site for a physical consulate,” Ambassador Fischer said. “Opening a consulate will allow the United States to take further advantage of Morocco’s strategic positioning as a hub for trade in Africa, Europe, and the Middle East. Specifically, it will support and encourage investment and development projects that bring tangible benefits for the region.”