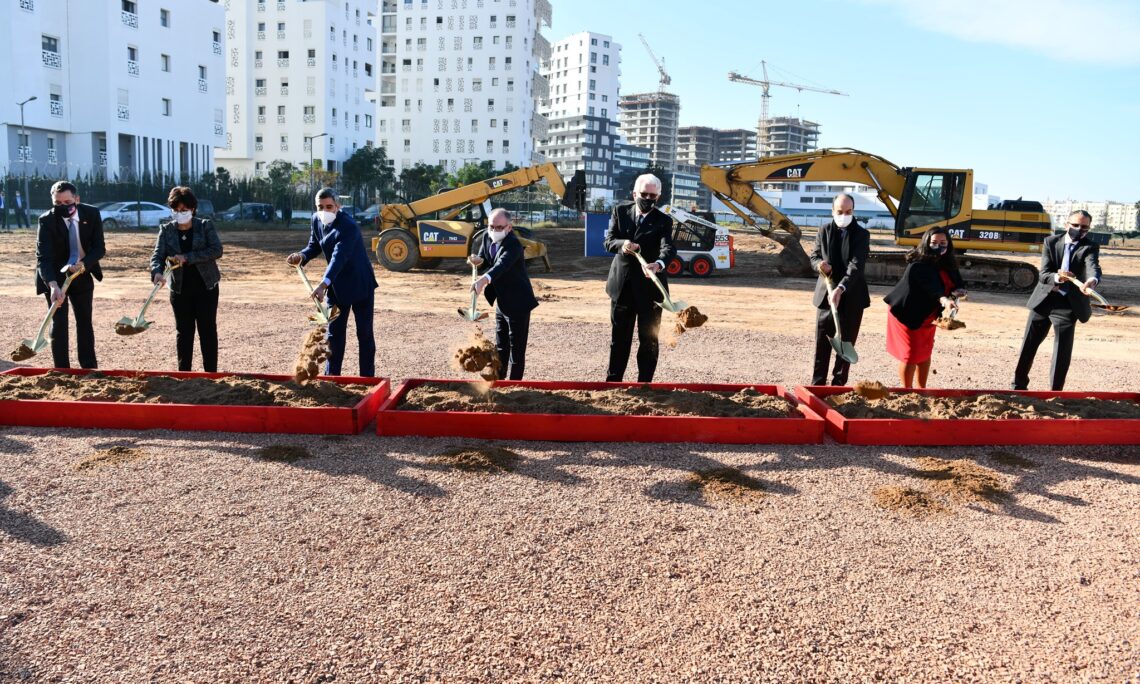 U.S. Ambassador to the Kingdom of Morocco, David T. Fischer, and the U.S. Consul General in Casablanca, Jennifer Rasamimanana invited representatives of the government of Morocco, including the Director of Protocol at the Ministry of Foreign Affairs, African Cooperation and Moroccan Expatriates, Ambassador Anas Khelas, the Wali of Casablanca-Settat, Said Ahmidouch, the Mayor of Casablanca, Abdelaziz El Omari, and the Governor of Hay Hassani, Khadija Benchouikh to a ceremony launching the construction of the new U.S. Consulate General in Casablanca on Thursday December 3, 2020.  The project, with a budget of over $300 million is expected to employ an average of 300 Moroccans and inject up to $100 million into the Moroccan economy, including expenses for salaries paid to Moroccan contractors, consultants and labor working on the project, as well as locally purchased goods and services procured in Morocco to support the construction process.  The new U.S. Consulate General in Casablanca, set to be completed in 2024 represents a significant and lasting investment in the U.S. – Moroccan partnership.

At the ceremony, Ambassador Fischer highlighted: “The United States is betting on the future of Casablanca as a regional center for business, trade, culture, and travel as King Mohammed VI’s vision of Morocco as the Gateway to Africa comes to fruition.  From consular services to commercial and trade relations to cultural outreach and beyond, we are building the world-class Consulate General that Casablanca deserves.”

The new U.S. Consulate General will be located in the Casa Anfa Development, a rapidly developing district in the center of Casablanca on the former site of the Anfa airport.  The design of the new Consulate campus blends contemporary American style with Morocco’s many historic influences, creating a symbol of the many connections between Morocco and the United States of America.  The new Consulate’s 2.8-hectare site will have easy access to Casablanca’s public tram network and aims for a Leadership in Energy and Environmental Design (LEED®) version 4.1 Silver Certification.  Sustainable features in the project include a solar photovoltaic system to improve energy efficiency, native and water-resistant plants throughout the gardens, and efficient water fixtures and a water runoff recovery system to conserve natural resources.

Consul General Rasamimanana highlighted: “I’ve been privileged to call this dynamic city home and to witness the strong and enduring friendship that we cultivate through the diverse ties between Casablanca and the USA.  Integrating our vibrant cultural center Dar America, welcoming facilities for consular and commercial services, the new Consulate General will ensure we continue to deepen and strengthen our partnership with Morocco.”