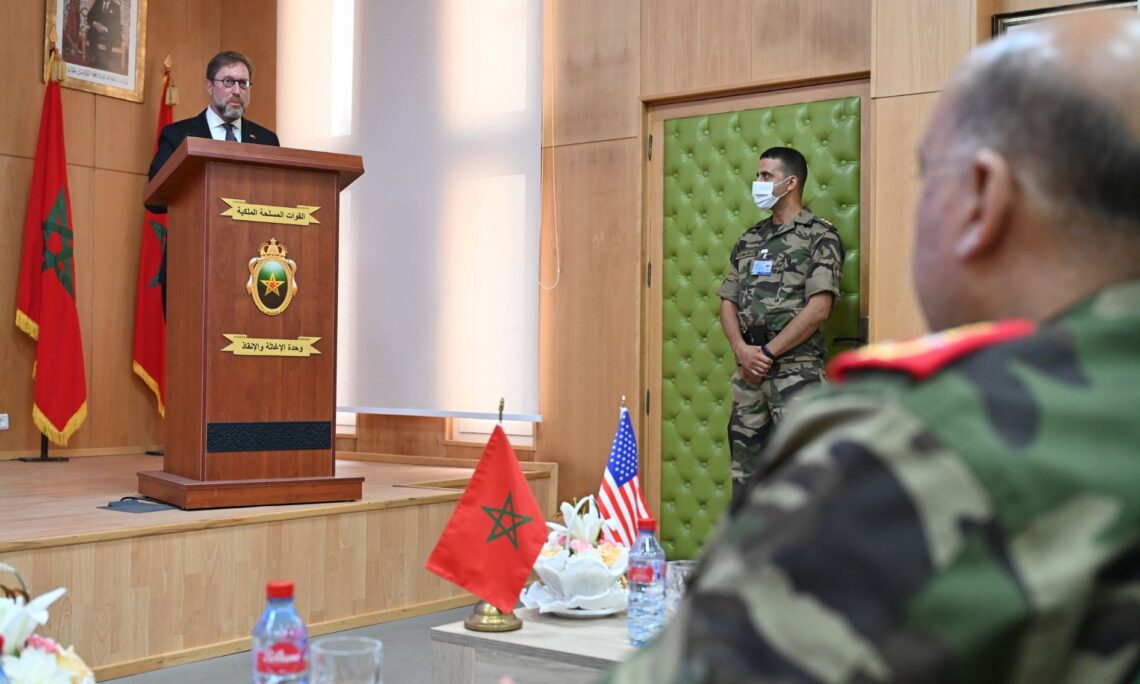 The Countering Weapons of Mass Destruction (CWMD) Security Cooperation Engagement Program trained a FAR company to detect, identify and secure chemical, biological, radiological, and nuclear (CBRN) hazards, using the most advanced equipment available.  During more than a dozen joint training events over the past six years, the program also prepared FAR personnel to conduct mass decontamination operations, as well as provide emergency medical care.  This work solidifies Morocco’s role in preventing the proliferation of WMD and the illicit transfer of related materials.  It also enables the FAR to deploy rapidly, both inside Morocco and throughout the region, to confront a CBRN emergency.

“The U.S.-Morocco relationship keeps going from strength to strength, and our exceptional military relationship has only grown stronger in recent weeks and months, thanks to joint training programs like this one,” said U.S. Embassy Chargé d’Affaires David Greene, who attended the ceremony at the FAR CBRN Company’s headquarters in Kenitra.

“Since 2015, Morocco has been one of our most important partners in Africa, working side-by-side with U.S. military personnel to acquire the skills and tools needed to protect against a range of potential threats,” said Ben A. Cacioppo, DTRA’s Regional Attaché. “The FAR has already demonstrated its abilities in military exercises – including African Lion, the largest annual military exercise on the continent –  showing that it is fully interoperable with U.S. and NATO forces that counter chemical, biological, radiological and nuclear threats.”

During the most recent African Lion exercise, in June, the FAR worked alongside a CBRN unit from Senegal at the Agadir port, expanding its regional response capabilities.

The FAR CBRN Company will continue to partner with additional U.S. organizations, including the Utah National Guard State Partnership Program, NATO and other African countries, such as Senegal and Kenya, which both completed the CWMD Security Cooperation Engagement Program.  Through these relationships, the FAR can ensure its critical CBRN response capability stays ahead of emerging threats.

DTRA has worked closely with Morocco to enable and refine the FAR’s overall response plan against CBRN threats.  In recent days, a DTRA team reviewed the FAR’s standard operating procedures and confirmed operational status of all equipment.

Morocco participates in more than 100 military engagements with U.S. forces yearly. It hosts African Lion and is a major partner in both the U.S. International Military Education and Training and Foreign Military Sales programs.

For more information on DTRA’s efforts to work with Morocco and other regional partners, visit DTRA.mil or contact U.S. Embassy Morocco’s press section.