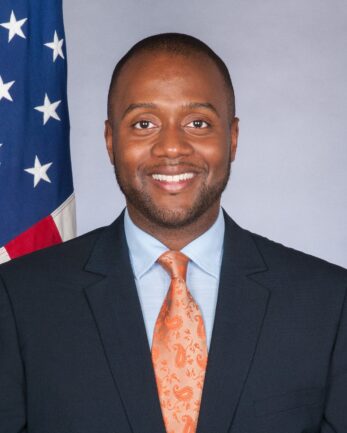 Lawrence Randolph is a Career Member of the Senior Foreign Service and assumed responsibilities as the United States Consul General in Casablanca on January 4, 2021.

A United States Diplomat since 2003, Lawrence last worked for the Director General of the Foreign Service where he helped her establish a worldwide employee resilience and well-being program called TalentCare.  Prior to that assignment, he served as the Deputy Chief of Mission at the U.S. Embassy in Algeria. He arrived in Algiers from Frankfurt, Germany, where he was Public Affairs Chief.  Before moving to Frankfurt, he spent a year in Kabul, Afghanistan leading the External Affairs Unit of the Political Section.  He was also part of a small team of diplomats and military officers charged with negotiating a Bilateral Security Agreement between the U.S. and the Afghan governments.

Lawrence’s first assignment was in Cairo, Egypt where he managed the Immigrant Visa Section for one year and worked as Staff Assistant to Ambassador Francis Ricciardone for a year.  After Cairo, he moved to Dhahran, Saudi Arabia as a reporting officer focusing on human rights and economic issues.  He then served in the Operations Center of the State Department where he was one of 25 officers responsible for briefing then Secretary of State Condoleezza Rice and other senior officials on breaking foreign affairs matters.

He has done temporary duty assignments in Libya, Syria, Brazil, and Mozambique.

He graduated from Morehouse College with a BA in International Studies and received a Master’s in Public Administration from Columbia University.  Lawrence was a recipient of the Thomas R. Pickering Foreign Affairs Fellowship.  He is a native of Boston, MA and is married with a young daughter.  He speaks Arabic, French, German, and Spanish.