What is Moonshot Morocco?

On July 20, 1969, millions of people across the world watched as Commander Neil Armstrong became the first human to set foot on the moon, taking “one small step for man, one giant leap for mankind.”

To celebrate the spirit of risk-taking, innovation, and achieving the seemingly impossible, the U.S. Mission in Morocco has launched a new campaign:

Moonshot Morocco: #7ta_7aja_Mab3ida (Nothing is out of reach!)

Activities throughout 2019 are engaging Moroccan youth in science, technology, and entrepreneurship, honing their leadership skills, and developing their self-confidence and the ability to undertake new and creative projects – to achieve their own “moonshots” where nothing is out of reach. 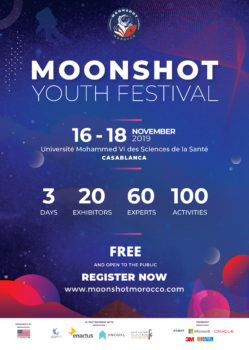 This large-scale youth festival, the capstone event for our Moonshot Morocco initiative, will take place November 16 – 18 at the campus of Casablanca’s Mohammed VI University of Health Sciences.  The Embassy is partnering with three Moroccan NGOs – Tamdoult Association, Enactus, and Anoual Association, to offer exciting speakers and trainers from the United States and Morocco, as well as booths that display new and promising technologies, all a advancing the Moonshot Morocco themes:

Check back for updates as the schedule develops!

The Embassy is proud to sponsor this year’s NASA Space Apps Challenge, in partnership with Loop for Science and Technology and the Ecole Centrale.  The Space Apps Challenge is a global competition in which thousands of teams worldwide work to solve challenges proposed by NASA engineers and scientists. It’s intended to inspire young Moroccans to help us better our understanding of the Earth and our place in the cosmos and solve some of the great issues we face as a species, both down here and up there, among the stars.

Dr. Deborah Barnhart, the CEO of the U.S. Space and Rocket Center, and Danielle Nuding, an engineer at NASA’s Jet Propulsion Laboratory, will be on hand to mentor hackathon participants, as well as engage in other programs.  Don’t miss their public talk in Casablanca on October 17th!

July 21 Space Day (Rabat) – It’s the 50th anniversary of the Apollo 11 moon landing! We are celebrating with our “Space Day.” We are teaming up with our Moroccan Spacenauts Association colleagues to have a robotics competition. Visiting Computer Scientist, Dr. Ayanna Howard from Georgia Tech University will be visiting us and we will also be screening the 2016 movie “Hidden Figures.”

July 22 Dr. Ayanna Howard is visiting (Casablanca) – Dr. Ayanna Howard will be visiting our friends at Dar America at 10am. Dr. Howard  Dr. Ayanna Howard received her B.S. in Engineering from Brown University, her M.S.E.E. from the University of Southern California, and her Ph.D. in Electrical Engineering from the University of Southern California, Los Angeles in 1999. From 1993-2005, Dr. Howard was at NASA’s Jet Propulsion Laboratory, California Institute of Technology, where she led research efforts on various robotic projects utilizing vision, fuzzy logic, and neural network methodologies. She also served a term as the Associate Director of Research for the Georgia Tech Institute for Robotics and Intelligent Machines, a term as Chair of the multidisciplinary Robotics Ph.D. program at Georgia Tech, and as associate chair for Faculty Development in the School of ECE from 2016-17.

June 12 – Technopark Auditorium, Tangier, The Future of Manufacturing and how 3D printing will Shape the Industry – The U.S. Embassy in Rabat is proud to bring you Mr. Jordan Noone, co-founder of Relativity Space. This company is a private American aerospace manufacturer company headquartered in Los Angeles, California. Relativity is developing its own launchers and rocket engines for commercial orbital launch services. Mr. Noone will discuss starting a business, innovation, prototypes and business plans, as well as new advances in technology. This event starts at 18:00 and is free and open to the public.

June 14 – Dar America, Casablanca, 3D Printing Industry and/or How to Achieve your Goals – Mr. Noone will be at Dar America, our U.S. cultural center in Casablanca at 16:00 – 18:00 to present on the future of manufacturing and how 3D printing will shape the industry. The event is free and open to the public.

June 21 – As part of our U.S. – Morocco Food Week 2019, visiting American chef, Nasser Jaber will participate in the Chef Showcase in Marrakech in Jamaa El Fna Square at 19:00.

During the holy month of Ramadan, we will highlight the seven career centers that are functioning in Morocco. We will be sharing videos and posts about what these career centers offer, in terms of services, and how the U.S. government (through USAID) is working with our Moroccan government and private partners to improve the employability of youth.

May 20, Restaurant Le Patio, Hôtel Gauthier, Casablanca – As part of our Moonshot Morocco Campaign, U.S. Embassy Rabat and Dar America were happy to host nearly 20 Moroccan social media influencers as part of our #Digiftour. Thank you again to all who attended. Stay tuned for more events on our social media platforms in the future.

Apr 6 – 12 T Sisters The U.S. Embassy is bringing you entrepreneurship and the arts! We are proud to organize this musical tour for the folk, rock, and jazz group the T Sisters, who are visiting Casablanca, Agadir, and Taroudant. Coming straight from the Bay Area in California, the T Sisters will discuss taking risks by launching artistic endeavors with Moroccan youth, and  will collaborate with Moroccan musicians throughout their tour. Be sure to check it out!

April 12 – 17 Lectures and workshops on digital engagement featuring Adam Gausepohl. We are pleased to welcome Adam Gausepohl to Morocco!  Adam is the CEO and Head of Creative at PopShorts, a social media strategy and influencer marketing agency. Since founding PopShorts in 2013, Adam has become one of the leaders in the social marketing space; he is a judge of the Webby Awards and the Shorty Awards, and was named a Forbes 30 Under 30 Finalist in the category of Marketing and Advertising. Adam has crafted award-winning campaigns for the world’s largest brands, studios, and agencies, which have reached over one billion people and engaged millions more across all social platforms. His list of clients includes Disney, NBC, ABC, Lionsgate, Sony, Geico, Chase, The Coffee Bean & Tea Leaf, Nordstrom, the Los Angeles Kings, Ford, Adobe, and many more. . Adam will be leading workshops for young Moroccan entrepreneurs and civic leaders on how to use digital tools to grow their enterprises.  Follow us on social media to find out more about specific events and cities.

Apr 12 – 14 DigiGirlz National Competition As part of Moonshot Morocco, the Embassy has collaborated with Microsoft on our DigiGirlz program, which trains 20 Moroccan female university students to mentor 80 Moroccan high school girls in designing science-based projects.  The girls have participate in coaching sessions to develop entrepreneurship plans connected to science and technology.  The national finals of the DigiGirlz competition will take place April 12 – 14 in Rabat.  Winning participants will receive seed funding to launch their projects, under the supervision of Microsoft and their mentors.

April 24 – 26 Global Conference on Space for Emerging Countries (GLEC) (Marrakech) The International Astronautical Federation (IAF) together with the Centre Royal de Télédetection Spatial (CRTS) and with the support of the Centre National D’Etudes Spatiales (CNES) are hosting the first GLEC conference and U.S. Embassy Rabat is pleased to contribute.  Former National Aeronautics and Space Administration (NASA) Administrator (until January 2017), Charles Frank Bolden Jr. will be speaking virtually at the event and our Space Camp and other alumni will be in attendance.

Apr 26 – 28 Morocco Future Leaders finals The U.S. Embassy has partnered with Association Anoual on an exciting initiative entitled “Morocco Future Leaders.” This program offers a group of 30 young aspiring Moroccan leaders from the North, a series of five monthly, two-day trainings in skills that will help them achieve their full potential.  Workshops topics include effective leadership, team management, project design, marketing and communication, and effective youth engagement.  The finals for Moroccan Future Leaders will take place in Al Hoceima April 26, to 28 as part of the Moonshot Morocco initiative.

March 11 – 15 Katie Henry, an award-winning American educator who currently works as the professional development coordinator for the robotics company BirdBrain Technologies, visited Morocco in March. .   Katie led workshops with Moroccan teachers in Fes, Oujda and Casablanca on how to incorporate science, technology, and robotics into their teaching – and get students excited about these subjects!  She also led robotics demos for students and participated in a public talk on breaking barriers to allow girls and young women to pursue their dreams in science and technology.

Feb 15 – 17 – Tech Camp Tangier (Tangier) U.S. Embassy Rabat, in partnership with Enactus Morocco, held a regional “Tech Camp” in Tangier February 15 – 17.  The Tech Camp offered over 40 young Moroccans interested in social entrepreneurship three days of intensive work and collaboration, during which they had the opportunity to exchange ideas, learn from experts in the field, and develop projects that will use technology to make a positive social impact in their communities.  The Tech Camp focused on projects that used technology (applications, artificial intelligence, machine learning, and hardware) in the sectors of eco-tourism, agriculture, the environment, and green industry.   The Tech Camp team that developed the winning project will have the opportunity for additional mentoring and training.

February 19 – Moonshot Morocco Launch Event. event (Rabat) U.S. Embassy Rabat Chargé d’Affaires, Stephanie Miley, joined Ministry of Education Director of Cooperation and the Promotion of Private School Teaching Mohamed Dali to officially launch Moonshot Morocco on February 19.  An audience of approximately 300 Moroccan youth participated in the event, which included inspirational talks from young Moroccan alumni of the Embassy’s Space Camp exchange and a presentation by retired NASA astronaut Daniel Tani on his career and work on the International Space Station.  One of the highlights of the evening was when a seven-year-old Moroccan girl, Khadija, who had travelled from Tetouan for the event with her mother, came on stage to present Mr. Tani with a picture of astronauts that she had drawn.  The event was organized in partnership with Moroccan Spacenauts.

Retired American astronaut Daniel Tani visited Morocco February 18 to 21, to share stories of his life, career, and time in space.  During his 16-year career at NASA, Dan flew on two space missions, for an accumulated 132 days in space, featuring six space walks.  During his trip to Morocco, Dan gave talks and took questions from energetic student audiences at Rabat International University, the ENSA Engineering School in Kenitra, and the Faculty of Science at Hassan II University, as well engaging with members of Dar America.  He also had lunch with 10 young Moroccans from across the country who won a video contest, answering the question “how did the moon landing inspire you?”

Dan has this advice for young Moroccans on achieving their own Moonshot:

“Think “journey” more than “destination”.  By that, I mean, it’s important to have goals – be a doctor, scientist, professional basketball player, parent, etc., but it’s more important to focus on the path to that goal – school, friends, activities, practice, finding your place in the world.  Goals are useful, but there are many factors that are not in your control that may limit those goals – you may not get accepted into medical school or you don’t have the talent to play basketball professionally.  But if you do well on your path, many other options will open up to you – an array of new goals!  You can and will do amazing and wonderful things – your “moonshot” – it just might not be the moonshot that you are imagining right now.”

The beginnings of the Apollo 11 Space Program 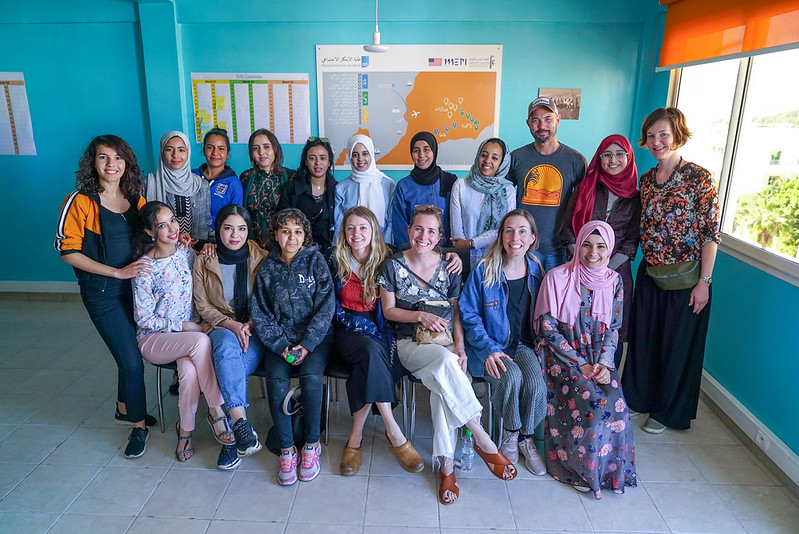