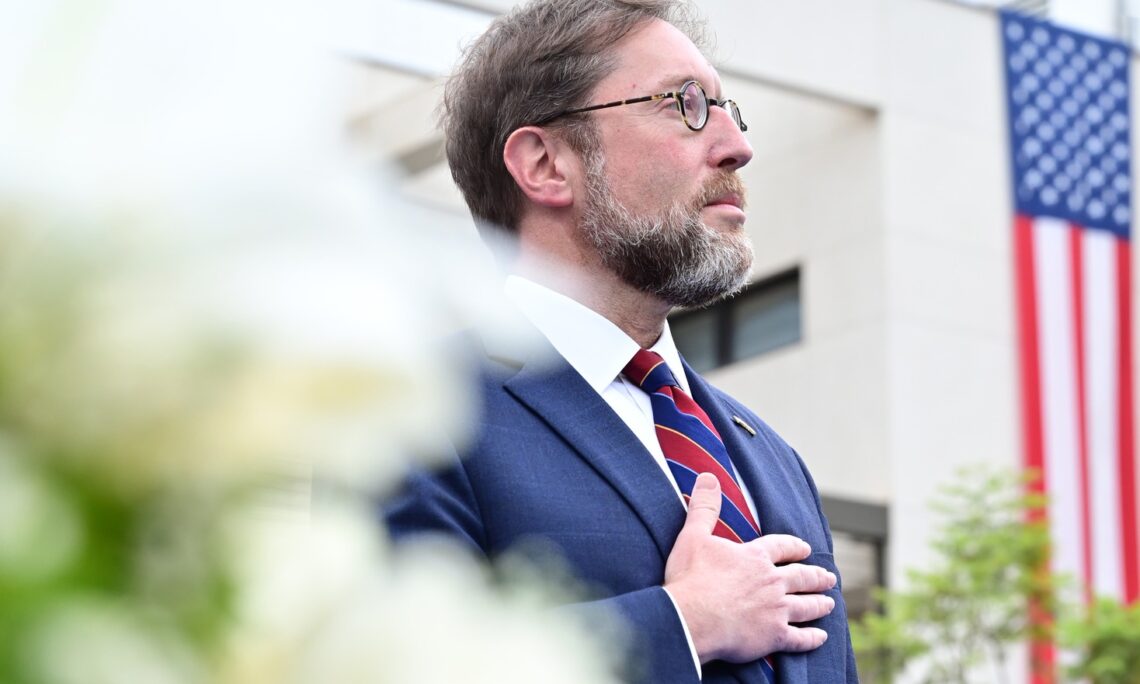 Thank you all for joining us this evening to celebrate the 246th birthday of the United States of America. It is wonderful to be together again at the Embassy, for our first in-person Independence Day event since 2019. And it is an honor to welcome you on behalf of the diverse and talented team of the U.S. Mission to Morocco.

On your way in, I hope you had a moment to watch some of the short video about the remarkable staff of the Embassy and the Consulate General. In that video, my teammates talk about their backgrounds and what brought them here, showing us the true diversity of both the United States and Morocco.

That diversity is critical to the strength, character, and adaptability of both our nations – and it is at the heart of our celebration tonight. For example, you’ll see around the courtyard a number of quotations and thoughts on the theme of diversity and the power we find in it.

It’s is also a cornerstone of the strong, vibrant U.S. relationship with Morocco, a country that deeply values and promotes its own diversity.

I have witnessed this firsthand so many times in my own travels across this beautiful country. Of course Morocco’s geographic diversity is legendary, and when it comes to cuisine, well, I learned last night that there are 150 different types of couscous and 19 different kind of pastilla. Recently I was in Meknes to see the newly restored Jewish cemetery and participate in a Hiloula with prominent members of Morocco’s Jewish community. Last year, I attended a rededication ceremony for St. John’s Anglican Church, the oldest church building in use in Casablanca. And it was just over a decade ago, when I was here on a previous tour as political counselor, that Morocco’s amended Constitution recognized Amazigh as an official language, highlighting the Kingdom’s linguistic and cultural diversity.

We Americans deeply respect Morocco’s efforts to honor its own diversity, because our 246 years of history have in many ways centered on the struggle to expand on the promise of our own founding document, the Declaration of Independence, “that all men are created equal.”

At our nation’s founding, those words had a very different meaning from what they signify today. In 1776, that promise of equality excluded so many: women, Black people, Native Americans, religious minorities, people with disabilities, LGBTQI+ individuals.

Many of the first European settlers in North America made the treacherous journey in search of religious liberty. Freedom of religion – along with freedom of speech – was enshrined as the first amendment in the Bill of Rights of the U.S. Constitution.

And yet that Constitution institutionalized slavery that kept millions of Black Americans in chains, and even after civil war and the abolition of slavery, it would be another century before the civil rights movement ended legal segregation and earned voting rights for Black Americans.

And it took more than 70 years for the women’s suffrage movement to win the right for women to vote in the United States, with the ratification of the Constitution’s 19th amendment in 1920. On the way in you may have noticed the Pride flag in our lobby – in recognition of the beginning of the movement to provide equal rights protection for LGBTQI+ individuals, which started in June 1969 in New York City.

In short, our work fighting for equality and respect for diversity goes on, and remains essential. The United States and its close allies and partners understand that building a more equitable, inclusive, and secure global society is our common goal. Whether fighting anti-Semitism or Islamophobia, eliminating gender-based violence or ending racial discrimination, there is always more work to be done – but what cause could be more noble?

And so as we look back on nearly two-and-a-half centuries of American history, we do so with pride – at how we learn from the past, identify our challenges and take them on, and continuously renew our society so that it is more inclusive, more open, and, simply, greater.

And as we look back on our history, we also look back with pride and appreciation on our ties with Morocco, a partner that has been with us for pretty much that entire 246-year run. Last year we celebrated the 200 anniversary of the Tangier American Legation, and in 2024 we’ll complete our new Consulate in Casablanca. When that consulate opens, Morocco will be home to both America’s oldest, and newest, diplomatic facilities in the world.

To some of you it may seem like I’ve also been here for that whole 246-year run. Not quite. I first came to Morocco in 2011 for four years, then returned in 2019. In a profession where moving around is common, that is quite a lot of time in one country. My children – now high school and college students – basically grew up here; Morocco truly feels like a second home. And in two short weeks, sad to say, I’ll be departing.

During my years here I have had the pleasure of visiting nearly every corner of the Kingdom, from its ancient cities to its far deserts. I have enjoyed octopus couscous in al Hoceima, Dakhla oysters, olives in Beni Mellal, and oranges in Berkane.

I have seen remarkable advances ranging from TangerMed’s success and the construction of Africa’s only TGV; to Morocco’s leadership on global challenges –hosting COP22 in 2016 and, just last month, a Defeat-ISIS ministerial, the first ever held on the African continent. We have worked together to protect our citizens against COVID-19, to thwart terrorism and keep our people safe, to deploy more than $1 billion in assistance through the U.S. Millennium Challenge Corporation, USAID, MEPI and other programs that promote human development. As we gather tonight, African Lion, the largest military exercise on the continent, with thousands of soldiers and dozens of partners and observers, is getting underway.

Every year our ties grow stronger with two-way trade and investment, recently reaching more than $5 billion in annual bilateral trade. In that context let me express a special thanks to all the American and U.S.-linked businesses and organizations that contributed to this event today as sponsors and who are so critical to the strengthening of the U.S.-Morocco relationship. May your endeavors in Morocco continue to flourish and grow.

One thing I will never forget is the work we have done together to support young people. From 2019’s “Moonshot Morocco” campaign to NASA space camp to leadership academies, we have worked closely with government and institutions all over the Kingdom to create more opportunities for Moroccan youth.

In concluding, I want to thank Morocco – malikan wa shaaban – from His Majesty the King to individual citizens – for making this country a welcoming place for myself and the hundreds of thousands of other Americans who visit as tourists or call the Kingdom home.

My family and I will leave Morocco with countless wonderful memories, and I leave knowing that this historic relationship continuous to flourish, with even more success undoubtedly ahead. Here’s to the next 246 years. Thank you.