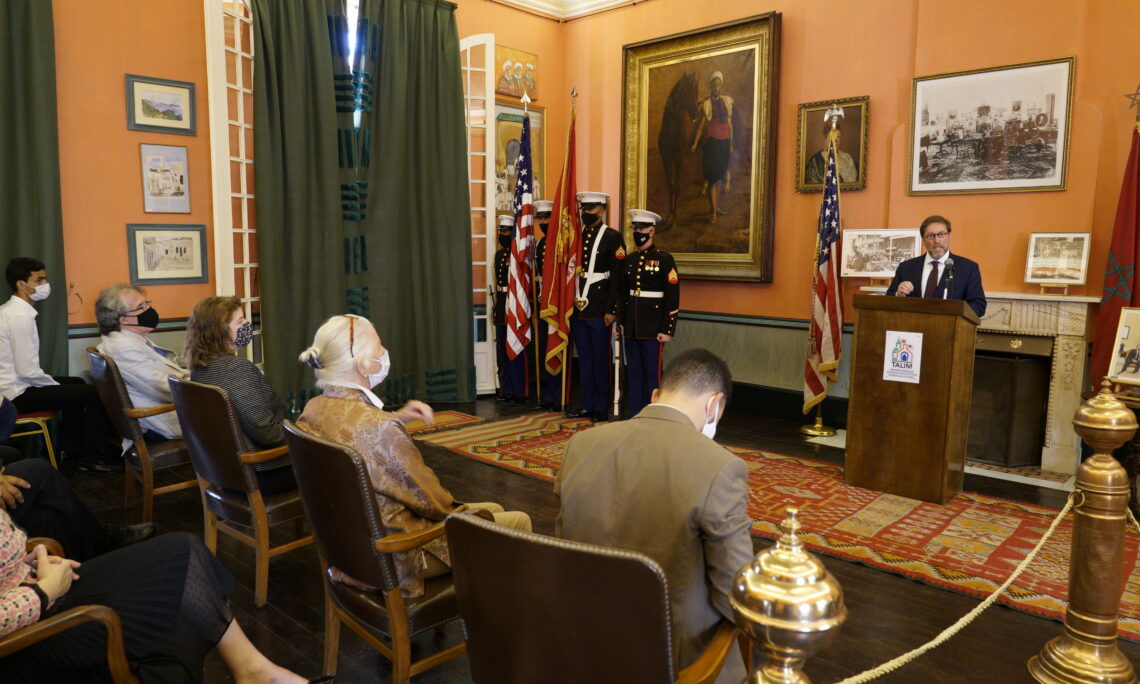 Tangier, May 17, 2021 – Two hundred years today, the American Legation in Tangier became an official U.S. diplomatic mission, when U.S. Consul John Mullwany moved into the building. The Legation was a gift from Moroccan Sultan Moulay Suliman earlier in 1821.

It was the site of many significant events in American, Moroccan, and world history. These include negotiation of the Spartel Lighthouse Treaty, one of the first international conventions signed by the United States, as well as agreements with Morocco to facilitate shipping and trade. During World War II, the Legation served as planning headquarters for Allied operations in North Africa and was also used by the U.S. Office of Special Services to break Nazi codes. One of the two first U.S. diplomatic missions to receive Marine Security Guard detachments, the Legation was well known in the Medina for always having a U.S. Marine standing sentry outside its entryway.

In an event at the Legation today, which included a Presentation of the Colors by U.S. Embassy Marines, David Greene, Charge d’Affaires of the U.S. Embassy, said, “The Moroccan Sultan Moulay Slimane gave this magnificent building to the U.S. Government in 1821. And it was exactly two hundred years ago today when U.S. Consul John Mullowny moved into this building and the Legation became an official diplomatic mission.

I would like to thank his Majesty the King Mohammed VI for his ancestor’s generosity, just as we honor the King today for his wise leadership.”

The American Legation served as a U.S. Diplomatic mission from 1821 until the 1960s, when it became a diplomatic language school and then a Peace Corps training center. Since the 1970s it has been operated as a museum, cultural center, and research library by the Tangier American Legation Institute for Moroccan Studies (TALIM).

In 2021 the U.S. Embassy joins Moroccan partners in celebrating the Legation as a symbol of U.S.-Moroccan friendship. Bicentennial activities take the form of a range of cultural, outreach, and educational programs, including a museum exhibit that will open at the Rabat National Library on June 10, staying there until late September before moving to Casablanca.