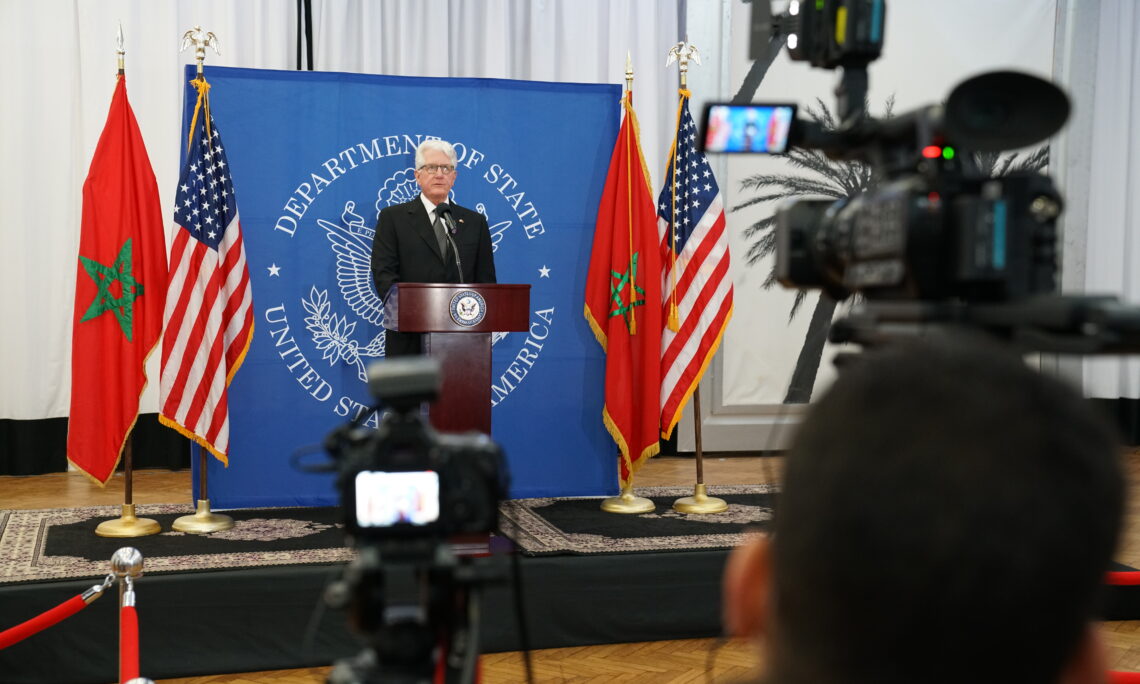 Thank you all for being with us today. On January 20 – just two days from now – I will conclude my tenure as the United States Ambassador to Morocco.

I arrived in Morocco exactly one year ago. My very first day here, I had the honor of meeting His Majesty King Mohamed VI. That meeting set the tone for everything that has followed. I would like to thank His Majesty for the foundation he created to guide the U.S.-Moroccan friendship towards an ever-closer partnership.

This partnership is centuries old, beginning with an incredibly bold and visionary step by Morocco, when it became the first country in the world to recognize the fledgling United States of America.

I have spent the past year returning the favor, strengthening this friendship to benefit both countries.

When COVID-19 arrived in Morocco, I immediately prioritized helping the Kingdom recover from the worst of the pandemic, with targeted assistance designed to support Morocco’s most vulnerable people.

As a result, through the U.S. Agency for International Development, the U.S. government has invested more than $9.5 million in Morocco’s COVID-19 pandemic response.

USAID has worked with the Ministry of Health and other partners to raise awareness about COVID-19, to train healthcare workers, and to provide hygiene materials and laboratory equipment. The U.S. Department of State and Department of Defense have similarly procured protective equipment for Morocco’s national laboratories. I am proud to have supported Morocco from the very beginning, in its successful battle against the pandemic.

Another significant moment in our friendship occurred this year when we broke ground on a new consulate for Casablanca. It will be a $312-million facility that shows our long-term commitment to Morocco’s financial center.

It also demonstrates our support for Morocco’s future as a gateway for all of Africa. Morocco is well positioned to take advantage of its many significant attributes, and the United States is proud to invest in that future.

Another major focus of mine has been to support Morocco’s public education system. When I speak with Moroccans, they often ask for more English instruction in schools, because they understand the importance of English in today’s world.

I listened and I acted. In close partnership with the Ministry of Education, USAID was able to obtain a record amount of funding for English instruction in public schools in Morocco.

This will increase English instruction throughout the public school system, providing Morocco’s youth with an invaluable asset for their future in the modern economy.

Separate from our support for English-language instruction, USAID’s “Reading for Success” program is significantly improving reading skills for Moroccan primary school students, reaching over 4 million students during this past year, in partnership with the Ministry of Education.

We also are supporting vocational training in a variety of ways. For example, we are pursuing partnerships and funding with the Moroccan government to enhance the production of traditional Moroccan silver jewelry. Courses will be offered in partnership with the Ministry of Education throughout the public school system.

I’m also proud to have supported the Millennium Challenge Corporation’s $450 million compact with Morocco. This partnership is strengthening land security and education for future generations of Moroccans, and is creating 12 new industrial zones.

This is MCC’s second Compact with Morocco. The first Compact upgraded key industries in Morocco, including agriculture, fishing, and tourism. Between these two MCC Compacts, the United States government has invested over $1.1 billion dollars to modernize the Moroccan economy and support the Moroccan people.

I’m not done yet. Over the past year, the U.S.-Middle East Partnership Initiative – known as MEPI – launched four new projects with nearly $600,000 in funding, focused on fostering economic entrepreneurship and political participation. Earlier this month we launched the MEPI-funded Dakhla Connect program, which will help improve the economic environment in Morocco’s southern provinces.

Also this year, I had the opportunity to see firsthand how Morocco and the United States are working together to secure the Tanger-Med Port, one of the largest container ports in the world. I toured the port facility and observed one of two mobile scanning units, which the United States donated to Morocco in 2017 at a cost of $4.5 million. Those units now help to inspect containers and passenger vehicles, keeping Morocco safe and its commerce flowing.

I have also sought innovative ways to boost bilateral trade and investment through our unique Free Trade Agreement. The opportunities are there, and the agreement has already boosted trade by over 500 percent since it was implemented. Our Free Trade Agreement is turning 15 years old this year, and is worth celebrating as it works to benefit the economies of both nations.

Speaking of anniversaries, we are planning a celebration in Tangier later this year to mark another great moment in our friendship—the 200th anniversary of Morocco’s gift of the historic Legation building to the United States.

The history between our two countries is filled with important events, and I believe that we made history again this year, several times over. We fostered a reconciliation between Morocco and another of our closest allies, Israel. President Trump made the announcement only one month ago, on December 10, and a great many things have happened since then.

By joining the Abraham Accords and reforging its partnership with Israel, Morocco is helping to stabilize the region, while also opening commercial opportunities. Morocco and Israel have reopened their trade offices, which will transition to full Embassies soon enough. Business people and investors in Israel are already reaching out to counterparts in Morocco, seeking to do business here. Of course, tourism from Israel will blossom. The Abraham Accords will continue to foster further other economic growth for years to come, as it encourages all of the partner countries, not just Israel and Morocco, to invest in each other.

History was made again this year when I became the first U.S. Ambassador to visit the Moroccan Sahara, after my government redrew our official map to recognize Morocco’s true borders. It was a huge honor to visit the southern provinces. I have significant respect for the special place that the Sahara holds in the hearts of all Moroccans.

When I visited the south, I mentioned to the press there that I might want to buy a villa in Dakhla. I was joking at the time, but now that everyone keeps asking me about it … You know, it might not be a bad idea.

During this past year, I have visited nearly every corner of Morocco, seeking ways to improve our cooperation and enhance the ties between our two great nations. My goal has been to make it clear to Morocco that America is investing heavily in this friendship, and believes strongly in our future.

As we prepare to depart Morocco, I want you to know that the future of the U.S.-Morocco relationship will be in good hands. I am 100 percent sure that the incoming Biden administration will nominate a highly qualified individual to fill this ambassadorial post, someone who will build on all that we have done together, and that the United States and Morocco will grow and prosper together as we have for over two centuries.

Morocco is near and dear to our hearts, and always will be. It is a country that is easy to fall in love with. The warmth of its people is simply unmatched.

We will miss Morocco, our Moroccan friends, and the lives we made here, but we leave happily, knowing that the future of the U.S.-Moroccan partnership has been made unbreakable, and can only grow stronger.

Thank you – and I will take some questions.