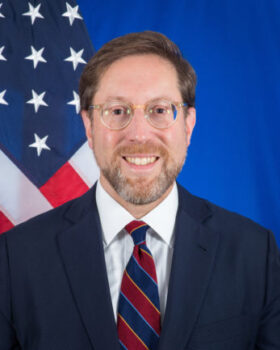 “I am excited to continue to work closely with the government of the Kingdom of Morocco, under the leadership of King Mohammed VI, as we build on the recent historic developments to make the U.S.-Morocco strategic partnership even stronger. As someone who has worked on U.S.-Morocco ties for over a decade, I can say how deeply appreciative we are of the King’s leadership on issues of common interest such as peace in the Middle East, and stability, security, and development across the region and the African continent. We also wish Ambassador Fischer best wishes as he returns to the United States in his personal capacity.”

Greene arrived in Morocco in 2019 and previously served as Charge d’Affaires from August 5, 2019 until January 21, 2020. This is his second assignment to Morocco, having also served at the Embassy, including as Political Counselor, from 2011 to 2015. During the course of his 24 years with the U.S. Department of State, Greene has also served in Pakistan, Jordan, Egypt and Vietnam. His assignments in Washington include Director of the Office of Egyptian Affairs; Director of the Office of Multilateral Affairs in the Bureau of East Asian and Pacific Affairs; Deputy Director of the Office of Israel and Palestinian Affairs; and liaison for Middle East issues in the State Department’s Bureau of Legislative Affairs.