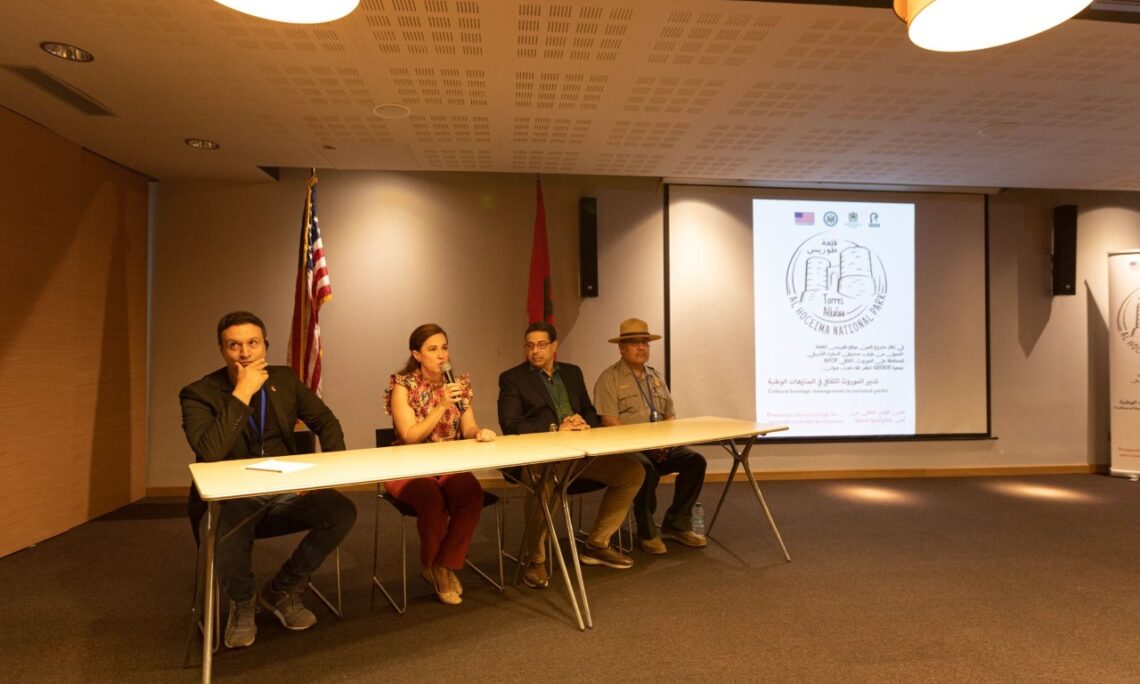 Al Hoceima – The U.S. Embassy in Morocco, in partnership with the Moroccan Ministry of Culture and GEODE Association, organized a two-day seminar in Al Hoceima on how national parks can be used to explain cultural heritage and history, as part of an ongoing $170,000 U.S. government grant that is supporting the restoration of Torres Al Kalaa, site of a 13th century fortress in Al Hoceima National Park.

The main American speaker during the seminar was Loren Yellow Bird, a ranger with the U.S. National Park Service, who provides cultural and historical tours of the Fort Union Trading Post National Historic Site in the U.S. state of North Dakota. Yellow Bird is a member of the Native American Arikara tribe; his great-great-grandfather was born near the Fort Union trading post, which was once a gathering site for European settlers and members of nine Native American tribes.

The seminar in Al Hoceima was an opportunity for Yellow Bird to share his professional experience with Moroccan experts who work in cultural heritage preservation, national park management, tourism and related fields – and how cultural preservation can play an important role in supporting regional economic growth and sustainable development.

“This has been a wonderful opportunity for me to share how our work in the U.S. National Park Service is preserving Native American heritage and explaining its importance to a new generation of Americans,” Yellow Bird said. “It is also wonderful for me to learn from Moroccan experts about how they use spectacular sites like the Torres Al Kalaa to preserve their own rich history.”

GEODE Association, the Moroccan NGO that is helping implement the Torres Al Kalaa restoration project, hopes that the historic site will serve as a draw for tourism and promote Amazigh culture in the Rif.

“We are thrilled to participate in this project and to learn from Mr. Yellow Bird about his work in North Dakota,” said Anouar Akkouh, GEODE’s president. “Our goal is for Torres Al Kalaa to inspire pride among Amazigh youth in the area.”

Mr. Akkouh is an alumnus of the U.S. Department of State’s International Visitor Leadership Program, which took him to the United States in 2018 and allowed him to visit several national parks in person. He said the experience allowed him to see cultural similarities between the native communities of the United States and Amazigh people of the Rif.

The Torres Al Kalaa project is funded by the Ambassador’s Fund for Cultural Preservation, a U.S. Department of State program that has provided more than $1 million in funding for cultural preservation projects in Morocco over the past two decades.

These projects range from restoring Kasbah El Mediha outside Kenitra to an ongoing project to restore the mosaics at Volubilis.